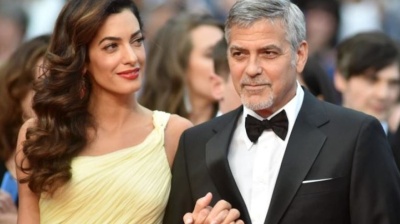 By Tamas Szilagyi in Budapest November 24, 2020

Hollywood actor George Clooney issued a statement on Monday night saying that accusations by the Hungarian government and its media about his connections with Hungarian born billionaire and philanthrope George Soros are false.

The Hungarian government and its media have used Soros as a bogeyman and a scapegoat for years, accusing him of undermining Europe's security by promoting illegal immigration. Accusations of playing by Soros' playbook are often used in communications to discredit critics of the government.

Soros made his voice heard on the veto of the European budget and recovery fund by Hungary and Poland. In an opinion piece published on commentary portal Project Syndicate the 90-year-old said that Europe must stand up to Hungary and Poland and the EU can’t afford to compromise on the rule-of-law provisions it applies for the funds it allocates to member states.

On Friday, Orban went out in full force against Soros, calling him "the most corrupt man in international politics".

Over the years European leaders, MEPs and journalists have become accustomed to attacks by the Hungarian government when they criticised the deterioration of democratic values in the country but it is rather unusual for a country to unleash a communication offensive against someone of Clooney's calibre.

A couple of days ago the US film star, the recipient of three Golden Globe Awards and two Academy Awards, talked about his new film The Midnight Sky, of which he is also the director and the protagonist, in an interview with GQ magazine’s YouTube channel.

"The mood of the film was determined by how much anger and hatred everyone experienced around the world. We weren’t in the middle of a pandemic when it happened, but there were still all these other elements, these elements of how much hate and anger were sorts of all of us experiencing at this moment in our history, all over the world. Go to [President Jair] Bolsonaro in Brazil, or Orban in Hungary, or look around, lots of anger and hate…"

Pro-government media were quick to jump on Clooney's comments. Hungary's leading online site Origo.hu dug up a photo showing Soros’ son Alexander with the actor. Later on Monday, the spokesman of the government information centre issued the following statement: "There has been a dispute between George Soros and the Hungarian government over immigration for years, so George Soros uses all possibilities to attack the Hungarian government. It is quite disappointing that there are actors, even non-political actors, who carry out Soros’ political intentions."

One Fidesz MEP called Clooney an "imposter" who speaks "rubbish" about Hungary, a place that he "couldn’t find on the map even by using Google Earth".

The 59-year-old star struck back with a long statement that suggests he is more familiar with Hungary's politics than many would suspect.

Orban's propaganda machine is lying, he said, adding that he had met Soros through his agent once in his life at a UN meeting on the refugee crisis and bumped into his son at an event in Davos. "That's all the communication I have had with him," he wrote.

Clooney then defended Soros' philanthropic work. "He not only provides support to the poor and refugees, but also supported Orban with a scholarship during the change of regime, and the government also accepted support from him in the good old days when Orban opposed communism," he said.

Indeed, Soros financed the Oxford scholarship of the young law student, a key figure of the Hungarian opposition, and other Fidesz politicians as well before the change of regime in 1988-1989. He financed today's ruling party, which at that time was a staunchly anti-Communist, liberal youth movement.

Media analysts say the government is set to lose the communication clash with Clooney. His comments about Orban drew the attention of people who had scant knowledge about Hungary's government or the country.