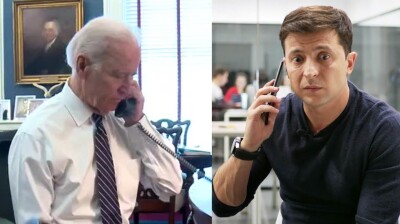 US President Joe Biden kept President Volodymyr Zelenskiy waiting for several months before making his first call, but the rapidly escalating tensions as Russia moves troops near the border have triggered the conversation where Biden said the US has Ukraine's back.
By FPRI BMB Ukraine April 8, 2021

After much anticipation, US President Joe Biden and Ukrainian President Volodymyr Zelenskiy finally spoke on the phone last Friday. According to the White House release, the heads of state discussed advancing Kyiv’s anti-corruption and democratic reform efforts. Biden also affirmed Washington’s “unwavering support for Ukraine’s sovereignty and territorial integrity in the face of Russia’s ongoing aggression in the Donbas and Crimea.”

The conversation came after weeks of correspondence between American and Ukrainian officials, and amid a build-up of Russian troops near the Russian-Ukrainian border. During their talk, Biden and Zelenskiy also agreed that reform is a necessary component of Ukraine’s Euro-Atlantic aspirations – a noteworthy agenda item given that Zelenskiy went on to reiterate Ukraine’s NATO ambitions this week (Unian).

According to Ukraine’s Ambassador to the US Oksana Markarova, arrangements for high-level official visits to Kyiv and Washington are in the works, though the coronavirus (COVID-19) pandemic has slowed things down (Radio Svoboda). Meanwhile, we still don’t know what delayed Biden’s talks with Zelenskiy. Ukraine had been awaiting the US president’s phone call since his inauguration in January.

Following the call, Krym Realii columnist Vitaly Portnikov writes that he initially saw the wait as standard protocol, or as the US buying time to watch Zelenskiy’s reactions to US policies – such as the sanctions against Ukrainian oligarch Ihor Kolomoisky. However, given the timing of the phone call, he now believes that the Biden administration has clearly shown that Ukraine is a priority. “When real danger arose, all these considerations faded into the background before the need to declare support for Ukraine and sober up the ‘hotheads’ in the Russian leadership,” he underscores.

Similarly, Censor.net editor-in-chief Yuriy Butusov stresses that Biden put aside his own agenda to speak with Zelenskiy, and, in doing so, showed that the US remains Ukraine's main ally against Russian aggression. However, he also warns the Ukrainian authorities that this doesn’t absolve them from pushing forward with reforms.

On the other hand, New Europe Center director Alyona Getmanchuk argues that Biden’s call, coming only after renewed Russian aggression, has confirmed Ukraine’s “victim” status in the eyes of the US (Ukrainska Pravda). As such, Getmanchuk predicts that Washington will pay attention to Ukraine only if Putin advances further or if Ukraine implements radical anti-corruption and de-oligarchisation reforms.

STOLYPIN: Talk of renewed war in Ukraine likely Russian coercive diplomacy, but worrying for all that

Russian forces are on the move around Donbas and into Crimea, and the unsettling thing for the outside world is that we don’t know why.

FPRI BMB Ukraine: Turning up the heat in the Donbas and Crimea
2 hours ago
ASH: Ukraine, ask yourself what Putin wants
1 day ago
RIMMER: The Hunger Games
2 days ago
COMMENT: Is Ukraine facing an imminent Russian invasion?
3 days ago
STOLYPIN: Talk of renewed war in Ukraine likely Russian coercive diplomacy, but worrying for all that
4 days ago