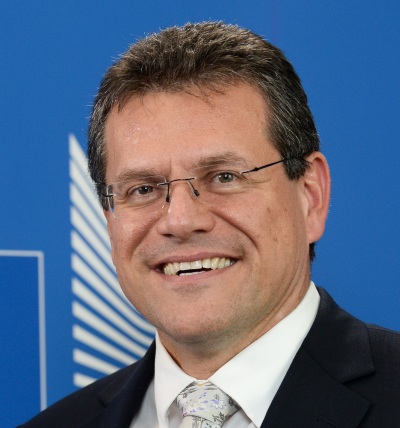 European Commission Vice-President for Energy Union Maros Sefcovic confirmed he will run for the post of Slovak president in the election to be held in March as the Smer-SD candidate, at a press conference on January 18, daily Hospodarske Noviny reported. He's collecting signatures and plans to submit them next week.

Sefcovic plans to be as close to citizens as possible. He stressed the need for modernisation, changes in health care, education and social affairs, as well as the need to fight corruption. He also promised to be a guarantee that Slovakia will be anchored in the European Union.

“I have always represented Slovakia for whole my life and fought for its interests. I have always done it with the aim of seeing Slovakia respected and with a confident voice. I'm standing here before you today as a candidate for Slovak president,” said Sefcovic, adding that Slovakia needs a good and non-partisan president as well as society-wide reconciliation.

“The question today isn't whether we need a coalition or opposition president. We don't need constant conflict. It's unproductive, and it weakens us. Slovakia needs a president of all citizens who will hold up a straightforward mirror to the government,” he added.

Ruling Smer-SD has been indicating for months that the best candidate would be current Foreign Affairs Minister Miroslav Lajcak, who, however, rejected this from the beginning and has not changed his mind.

The presidential election is to be held on Saturday, March 16. The deadline for submitting candidate nominations is January 31, 2019.

Skanska's Czech, Slovak and Polish operations will be merged into one business unit, Skanska Central Europe, the company said in ... more

The Visegrad Group (V4) countries have decided to jointly build a high-speed railway connecting Budapest, Bratislava, Brno, and Warsaw, the Hungarian foreign minister said after talks with the ... more