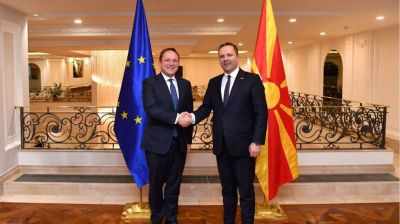 By Valentina Dimitrievska in Skopje January 15, 2020

The EU's new Enlargement Commissioner Oliver Varhelyi visited North Macedonia on January 15 to reitarate the European Commission’s commitment to the EU accession perspective of the country.

North Macedonia and Albania received a severe blow last October, when French President Emmanuel Macron vetoed the start of accession negotiations and underlined the need to make changes to the accession process methodology.

Varhelyi's visit to Skopje was his first visit to the Western Balkans since he took office on December 1, 2019, replacing Johannes Hahn. Varhelyi will visit Albania on January 16.

At the news conference in Skopje together with interim Prime Minister Oliver Spasovski, Varhelyi confirmed that EU enlargement is a priority of the European Commission, stressing that both countries are ready for negotiations.

“This time I have hope for a positive decision,” Varhelyi said in Skopje.

He pledged he will work for the start of negotiations in spring, alongside the adoption of an economic plan to support the region.

However, Varhelyi warned that the opening of negotiations will bring more challenges for the country.

He also urged authorities to continue reforms, saying that adoption of the new law on public prosecution will be a good signal for EU members.

According to him, the implementation of the Prespa name deal with Greece and the Friendship Agreement with Bulgaria is also of the key importance.

Regardless of results of the snap elections due in April, the commissioner said he expects a reliable partner following the vote.

Ex-PM Zoran Zaev resigned on January 3 to open the way for fresh elections, following the country's failure to obtain a date to start EU accession talks in October.

Bringing some good news, as he said, Varhelyi announced that he sought the European Parliament to approve funding of €50mn for North Macedonia as part of EU funds as a reward for the country’s political achievements.

During the news conference, interim PM Spasovski said that the European Commission expects the new enlargement methodology to result in a decision on the start of negotiations with Skopje and Tirana ahead of the EU summit in Zagreb in May.

“We are entering an important period in which we expect serious steps toward the realisation of one of our key strategic goals – EU membership,” Spasovski underlined.

“We expect a decision to start accession negotiations in the coming months after 15 years waiting as a candidate country,” he added.

North Macedonia has been an EU candidate country since 2005 and Albania since 2014.

BALKAN BLOG: US approach to switch from quick-fix dealmaking to experience and cooperation
Corona-induced slump in global clothing sector dragged down Albania’s 2020 exports
BALKAN BLOG: The controversial recipe for building up Albania