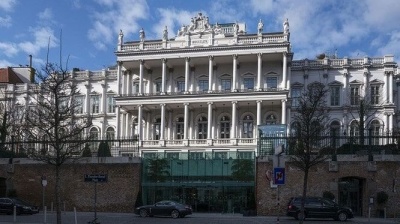 The protracted, stop-start Vienna talks on reviving the nuclear deal, held at the Austrian capital's Palais Coburg hotel, have at last produced a final, draft agreement. / IRNA.
By Will Conroy in Prague August 8, 2022

The Vienna talks are at long last over—but that doesn’t mean an agreement to relaunch the nuclear deal is done. For that to happen, the Biden administration in the US and Iran’s ultimate authority, its supreme leader, must approve the “final text” drafted by Iranian and European representatives at the negotiations in the Austrian capital over the past five days. And that’s far from a certainty, especially perhaps where US leader Joe Biden is concerned, given the volatile American political environment that will exist in the run-up to the November midterm elections.

"We worked for four days and today the text is on the table," an EU official at the talks told reporters. "The negotiation is finished, it's the final text... and it will not be renegotiated."

Further outlining the situation as it now stands, EU foreign policy chief Josep Borrell said on Twitter that everything that could be negotiated had been negotiated. He added that behind every part of the drafted proposals "lies a political decision that needs to be taken" in the capitals of the countries involved.

Responding to the announcement of the final drafted text, a US State Department spokesman said the US was ready to "quickly conclude a deal" to revive the nuclear deal, or JCPOA, on the basis of proposals put forward by the European Union. Tehran, he added, had repeatedly said it was ready for a return to mutual implementation of the agreement and Washington would now wait to see if "their actions match their words".

And therein lies the rub. For in Tehran, Iranian officials were saying much the same thing about the US. The line was that Iran would await whether Washington would show enough “flexibility” to get the deal over the line.

If it returns, the JCPOA—designed to curb Iran’s nuclear development programme to guarantee it is kept entirely civilian in return for the lifting of economic sanctions on Iran—would come back at a time that the Iranians are thought to have reached the point where they could stockpile enough highly enriched uranium to make at least one crude nuclear device. Preventing a nuclear arms race in the Middle East is clearly a priority for Biden, but the final provisions in the deal that must be accepted by the US and Iran to seal the return of the JCPOA are troublesome given the political constituencies that must be persuaded of the merits of a restored agreement.

One final issue is to what extent the US will guarantee that sanctions are lifted not just in name but in effect, by providing credit guarantees. Tehran is wary that Biden’s successor could unilaterally rip up the multilateral JCPOA, just as his predecessor Donald Trump did in May 2018—it wants to see binding pledges that business contracts signed before the next US presidential elections in November 2024 will be honoured by the next US administration, even should it pull out of the deal. Another outstanding issue is Iran’s demand that the Islamic Revolutionary Guard Corps (IRGC) be removed from the US’s list of foreign terrorist organisations (FTOs), but there are signs Iran may have relented on this point.

A third issue is Iran’s insistence that the International Atomic Energy Agency (IAEA), the UN’s nuclear watchdog, end an investigation into the origins of nuclear particles found at three Iranian sites. Iran remains deeply opposed to the investigation, saying it is based on intelligence provided by Israel.

Apart from Iran, the other remaining signatories to the 2015 nuclear deal are France, Germany, the UK, Russia and China, but all eyes will be on Tehran and Washington, which under Trump four years ago defied international diplomatic convention by walking out of the JCPOA.

An Iranian Foreign Ministry official was quoted by official news agency IRNA as saying that Tehran had given its preliminary response to the EU's text. It was "not at a stage to talk about finalising the deal," he said, as “more comprehensive discussions were needed in Tehran”.

Russian lead negotiator at the talks Mikhail Ulyanov on August 7 said of the latest efforts to bring back the JCPOA that "we stand five minutes or five seconds from the finish line."

Speaking to reporters outside Vienna’s Palais Coburg hotel where the talks were being held, he added: "They are sensitive [issues that are involved], especially for Iranians and Americans. I cannot guarantee, but the impression is that we are moving in the right direction."