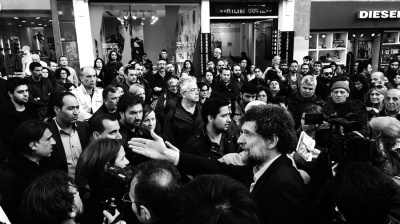 Turkey faced claims of a stark travesty of justice that flew in the face of a ruling from Europe’s top court as on April 27 philanthropist Osman Kavala was jailed for life on a conviction of trying to overthrow the government by financing the “Gezi Park” protests of 2013.

Ankara’s application to join the European Union has ground to a halt in recent years partly because of what member states see as the Erdogan administration’s dismissive approach to basic human rights and encroachment on the judiciary. The Kavala sentence, handed down without parole, will further set back any lingering hopes of getting it back on track. Turkey is also likely facing expulsion from the highest European human rights body, the Council of Europe. Amnesty International described the Istanbul court’s Kavala decision as “a politically motivated charade”. The US said it was "deeply troubled and disappointed" by the conviction. The packed courtroom reportedly erupted with protest chants including “long live freedom, down with tyranny!” as Kavala supporters heard the verdict.

The campaign to free Kavala has frequently pointed out that the authorities have never produced a shred of evidence that the philanthropist was involved in a conspiracy to bring down the Erdogan administration. Kavala was accused of financing the protests after he paid for a folding table and some snacks for demonstrators. President Recep Tayyip Erdogan has frequently slated the Paris-born Kavala in speeches, accusing him of connections to the Hungarian-American investor George Soros, the bogeyman of far right politicians around the world.

While announcing that it had decided to acquit Kavala of espionage charges due to a lack of evidence, the court also sentenced seven others to 18 years in jail each for aiding an attempt to overthrow the government and ordered their arrests.

Osman Kavala, 64, has been held since October 2017 on accusations of financing the protests which began as small demonstrations against an urban development plan in an Istanbul park, Gezi Park, and snowballed into nationwide anti-government unrest that met with a fierce response from the government.

Kenneth Roth, executive director of Human Rights Watch (HRW), responding to the verdict, said: “The conviction of Osman Kavala and the seven others in a sham trial where wild assertions and conspiracy theories stood in for anything resembling evidence is a gross violation of human rights and ample proof that Turkey’s courts operate under instructions from the Erdogan presidency.

“The war in Ukraine should not allow Turkey’s international allies to turn a blind eye to the severe crisis for the rule of law and human rights at home exemplified in this latest verdict and sentences.”

Roth also commented: “The convictions should be read as Turkey’s defiant answer to the Council of Europe, which in February took the unprecedented step of triggering infringement proceedings against Turkey over its refusal to comply with the European Court’s judgment calling for Kavala’s release. The European Court of Human Rights is due to rule again on the Kavala case and the convictions will surely expedite the infringement procedure against Turkey and deepen the crisis in the country’s relations with the Council of Europe.”

Kavala, who appeared in court via video link from Silivri high security prison on the outskirts of Istanbul, was reported by the Guardian as saying: “It is evident that those who issued the indictment did not feel constrained by laws, considering that they will receive political support as they intended to prolong my detention at all costs.”

He added: “I consider peaceful protests aiming to prevent government initiatives that are not in public interest as legitimate civil society activities and a requirement of democracy.

“After losing four and a half years of my life, the only aspect I can find solace in is the possibility that what I experienced could contribute to confronting the crucial problems in the judiciary of Turkey, and so those tried in future could receive better treatment.”

Last October, Turkey declared 10 western ambassadors, including those from the US, Germany and France, “persona non grata”, after they released a statement condemning Kavala’s continued detention, before later reversing the decision.

Erdogan has likened the Gezi protesters to Kurdish militants and those accused of orchestrating a failed 2016 coup against him. In accusing Kavala of trying to topple his government, he said Western allies would not release "bandits, murderers and terrorists" in their countries.

At the time of his arrest, Kavala was best known for spending part of his wealth to promote culture and projects aimed at reconciling neighbours Turkey and Armenia, AFP noted in its report on the verdict and sentencing.

Kavala and his co-defendants are expected to appeal against their convictions.