Deripaska steps up to Russia’s fight against the coronavirus pandemic 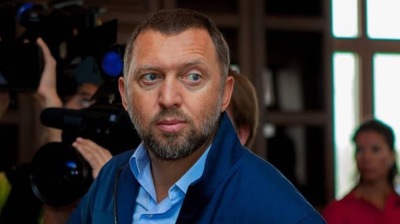 Russian tycoon Oleg Deripaska spent $20mn when Ebola broke out at the Rusal facilities in Guinea in 2014. Now his Volnoe Delo foundation is rushing out help to tackle Russia's outbreak of coronavirus / wiki
By Ben Aris in Berlin April 20, 2020

Russian tycoon Oleg Deripaska has thrown his money and hands-on-management style into Russia’s fight against the coronavirus (COVID-19) epidemic that is sweeping the world.

The coronavirus epidemic is now well rooted in Russia and in its exponential growth phase. Volnoe Delo, a charity founded by Deripaska, has been working in regions across the country to supply medical equipment, upgrade hospital facilities and support the elderly as Russia’s top businessmen increasingly embrace their corporate responsibilities to the society and country that made them so wealthy in the first place.

This is not Deripaska’s first encounter with a deadly virus. 2015 saw a breakout of the deadly Ebola virus in Guinea where aluminium producer Rusal, founded by Deripaska, has a major bauxite deposit. The virus infected a total of 29,000 people and killed 11,310 people – the largest and most lethal outbreak of the virus since it was discovered. The WHO classed the outbreak as a global threat.

Deripaska, then a president of Rusal, took personal charge of the fight to contain the killer virus and in less than two months had funded and built a $10mn epidemiological and microbiological diagnostic centre in Guinea’s Kindia province that is still there today.

Russian doctors were flown in to treat over 4,500 local residents who received free medical help. The Russian medics also trained 270 local medical personnel to establish a permanent facility to treat and contain future outbreaks. And the diagnostic centre in Kindia continues to train doctors to this day. Thanks in part to Rusal’s efforts the 2014 outbreak was halted, the contagion was contained within the region and a pandemic was avoided.

Now Rusal is facing another outbreak of a deadly virus in centres of its operations: Krasnoyarsk, Irkutsk, Sayanogorsk, Bratsk, Achinsk and other Siberian towns. This region has always relied on Deripaska for support. It’s home to hundreds of thousands of people with high-quality healthcare scarce even in normal circumstances and state financing typically lacking.

Two weeks ago, the local press reported that Deripaska flew into the region and met with health authorities in Irkutsk and Krasnoyarsk before going on to tour the local hospitals. It was later announced that he will finance the construction of seven hospitals for coronavirus patients as his first actions to contribute to the containment of the epidemic: two new hospitals in the Krasnoyarsk region, three in the Irkutsk region, one in the republic of Khakassia and one in his hometown of Ust-Labinsk in the Krasnodar region.

Deripaska’s Volnoe Delo foundation has already bought new ambulances and sent them to twelve Russian towns in Siberia and the Urals. The automobiles are produced by GAZ Group, Russia’s leading automaker and one of Deripaska’s holdings. They are capable of traveling off-road, fitted with modern medical equipment and special radio sets that are suitable for operations in remote areas.

The foundation has also bought over a million medical masks and other personal protection equipment (PPE) and sent them to over twenty towns in Siberia and the Urals as part of its campaign to tackle the pandemic.

“Volnoe Delo has also purchased 14 ventilators for a hospital in Ust-Labinsk. The foundation and the Faculty of Fundamental Medicine at Lomonosov Moscow State University have also launched a website with resources on how to treat respiratory diseases and ventilator use. The online project includes a series of video lectures in which one of Russia’s most senior intensive care specialists gives recommendations on how to care for patients with respiratory conditions and how to use a ventilator,” Volnoe Delo said in comments emailed to bne IntelliNews. Deripaska is also reportedly sourcing 250,000 COVID tests from China to bring to Russia.

According to Russian outlet Ko.ru, although Deripaska’s wealth has plummeted dramatically because of the US sanctions, he is spending the largest percentage of his fortune among Russia’s business elite to help fight COVID-19.

Meanwhile, last week, Rusal’s medical centre in Guinea’s received its first patient infected with coronavirus. He tested positive for COVID-19 and now remains in medical care. As of April 15, his condition is stable.