Death toll mounts as tensions between Armenia and Azerbaijan spill over 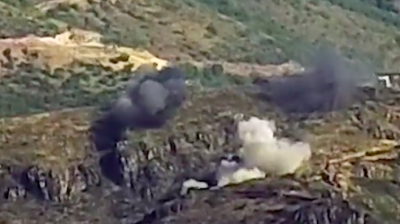 Azerbaijan reported the deaths of one of its generals and five other officers on July 14, in the worst outbreak of fighting between Armenian and Azerbaijani forces in several years.

The heating up of the usually frozen conflict over the disputed territory of Nagorno Karabakh follows the deaths of four Azerbaijani soldiers killed in border clashes between the two neighbours on July 12 and 13. A smaller number of deaths has been reported by Armenia.

Since then fighting has continued. On July 14, Azerbaijani citizens amassed on the Gazakh side of the border. A video live broadcast on Facebook shows hundreds of flag-wielding Azerbaijanis on the border of the two countries looking over Armenian troops on the valley floor.

Azerbaijan's military said it had destroyed an Armenian fortification and artillery and had inflicted casualties on "hundreds" of Armenian troops.

Armenia denied suffering any casualties on that scale but reported several wounded besides two officers killed.

At an emergency meeting on Monday, Azerbaijani President Ilham Aliyev said: "Armenia's political and military leadership will bear the entire responsibility for the provocation."

Meanwhile, Armenia’s Armenpress released a video of border clashes between the two states, claiming it was Azerbaijan which was targeting the country.

Military officials briefed Prime Minister Nikol Pashinian on the situation on July 14. A statement from the prime minister's office said the situation was "under control" despite the "hostilities unleashed by the enemy in the last two days".

The Armenian defence ministry said early on July 15 that “relative calm" was maintained along the northeastern part of the border between the two sides on the night of July 14-15 and no artillery was used during the night.

Azerbaijan and Armenia have been fighting over Nagorno-Karabakh, internationally recognised as part of Azerbaijan but whose population is ethnically Armenian, and seven surrounding territories since the late 1980s. A ceasefire in 1994 ended the bloodshed, but brought no resolution to the conflict.

This has been the most serious outbreak of fighting since April 2016 which saw the worst violation of the ceasefire since 1994, leaving hundreds of casualties on both sides over four days.

The Organisation for Security and Cooperation in Europe (OSCE) chairperson-in-Office, Albania’s Prime Minister Edi Rama, called on July 14 for an immediate return to ceasefire along the border.

“I am deeply concerned by the increased violence we have seen along the border between Armenia and Azerbaijan, and urge an immediate return to the ceasefire before we see any further loss of life,” Rama said according to an OSCE statement.

This followed an appeal from the UN Secretary-General Antonio Guterres for an immediate end to the fighting, in which he urged “all involved to take immediate steps to de-escalate the situation and refrain from provocative rhetoric”.

The two countries’ southern neighbour Iran has also called for a peaceful settlement to the dispute. Iran’s foreign ministry spokesman said his country’s position on the Karabakh region has not changed and still wants both sides to use peaceful means to resolve their dispute.

Iran has been dragged into the dispute between the two after being caught smuggling petrol and diesel to the Armenian-controlled region, in breach of its official neutral status.

Another regional power, Russia, also called for an immediate ceasefire and for both sides to exercise restraint. Russian Foreign Minister Sergey Lavrov held separate conversations with his counterparts from Armenia and Azerbaijan on July 13 to discuss the aggravation of the situation on the Armenian-Azerbaijani border.