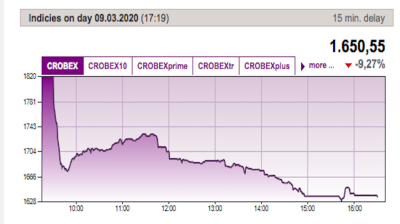 The fall in the CROBEX came on a day of chaos on the international exchanges after OPEC+ talks with Russia failed, sparking a standoff between Russia and Saudi Arabia and causing oil prices to tank.

Trading was suspended for half an hour during the day, with the ZSE citing “extreme market volatility”. As of 2.55pm local time, the index had dropped by more than -10% compared to the previous trading day, and only made a slight recovery after trading resumed.

Earlier in the day, Zagrebacka banka had asked for temporary relief from its obligations as market-maker citing the “extraordinary circumstances”, namely the “deviation of the CROBEX index value of more than - 5% from the last value of the previous trading day”.

This is the most significant daily decline in the last month for the CROBEX, which previously saw a drop of 4.91% on February 24 as rumours swirled about a coronavirus outbreak in the country, which was confirmed the previous day.

Among the companies that make up the ZSE’s main index are telcos Ericsson Nikola Tesla and HT, food companies Podravka and Atlantic Grupa, Zagrebacka banka, and Valamar Riviera and Arena Hospitality Group in the tourism sector.

In terms of sector, the telecoms companies were relatively resilient, with Ericsson Nikola Tesla trading down 8.53% at the end of the day, OT-Optima Telekom down 5.79% and HT down just 3.74%. Major food groups Podravka and Atlantic Grupa also saw their value fall by less than the index as a whole.

The biggest loser of the day was Valamar Riviera, which ended March 9 down 16.23%. The company had announced earlier in the day that it was planning a dividend of HRK1.2 (€0.16) per shareholder.

Movie night at the airport
COMMENT: Will Central Europe’s economic recovery be stymied by populist banking laws?
Adriatic ports after the storm

Industrial production in Ukraine tumbles by 16.2% year on year in April
3 hours ago
Polish retail sales come down crashing in April, hit by COVID-19 lockdown
14 hours ago
70% of companies in Czech Republic saw a drop in orders in May due to COVID-19 outbreak
2 days ago
Poland’s industrial production records unprecedented fall in April in the wake of COVID-19 lockdown
3 days ago
Poland’s PPI deepens fall to -1.3% y/y in April
3 days ago