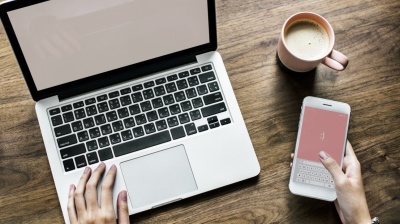 A growing number of companies across the Central and Southeast Europe regions are putting more of their business online — whether it's enabling their employees to work from home or ramping up online retail and other client-facing operations — in an attempt to continue operating through the lockdowns imposed due to the coronavirus (COVID-19) pandemic.

Until now, while internet use and e-commerce have been growing in countries across the region, by and large it still lags behind Western Europe, though with notable exceptions such as Estonia, the initiator of the world’s first e-residency scheme.

A Eurostat survey from 2019 shows that in the 12 months running up to the survey 88% of respondents had used the internet, and 71% of those had bought or ordered goods or services for their own use online. The number of online shoppers was particularly high among the 16-24 and 25-54 age groups at 78% and 76% respectively.

However, the figures vary widely between countries, with only around 30% of internet users surveyed shopping online in Bulgaria and Romania, and up to 91% in the UK and 86% in Denmark. The highest proportions of e-shoppers were all in West European countries; among the EU members to the east, the highest proportions were found in Estonia and Czechia, both at over 70%.

Between 2014 and 2019 the largest increases in the share of online shoppers were recorded in Croatia, Czechia, Estonia, Hungary, Lithuania, Slovenia and a single West European country, Spain. 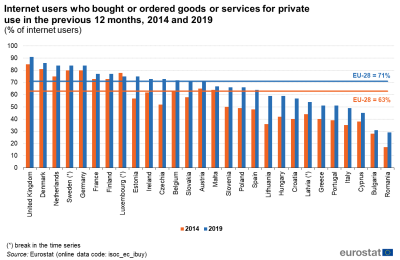 Panicked by the coronavirus pandemic, populations in numerous countries around the world — especially those not entirely confident in their governments’ ability to ensure food supplies — frantically started stockpiling groceries and hygienic products in March. This, coupled with fears of the spread of the virus in crowded shops, led to an explosion in online retail in recent weeks.

In the Czech Republic, which has seen the region’s worst outbreak of the virus, the amounts being spent online were reportedly approaching the spend during Black Friday, as reported by Expats.cz. In addition to buying food, Czechs were preparing for a potentially protracted period of lockdown by ordering sports equipment, bread machines and sewing machines. But almost no one wanted to buy clothes or shoes.

There was a similar phenomenon in Croatia, the first country in the region to confirm a coronavirus case. Between February 24 and March 15, Croatians spent HRK300mn (€40mn) more on items such as food, drinks and personal hygiene products than usual, while online sales were up by over 50%, according to data from GfK quoted by state news agency Hina. Specifically, Croatians stocked up on salt, frozen ready-to-eat meals, tinned meat and fish, wine and spirits, flour and yeast, toilet paper and soap.

Elsewhere in the region, pan-Baltic retailer Rimi was already planning to open its Estonian online store in May, but may bring the launch forward as an increasing number of people turn to online grocery purchases, the director of e-commerce at Rimi Estonia, Helen Lednei, told BNS. "The circumstances have now forced us to proceed much more quickly to respond to market demand," Lednei told the news service. While food retailers remain open, most shopping centres as well as non-essential stores have now been closed in Estonia.

Similarly, while the business of Romanian food retailers is booming, many non-food retailers have suspended operations at their physical outlets and moved online.

Polish discount fashion and home decor retailer Pepco, Danish furniture and home decor retailer JYSK, German footwear retailer Deichmann, French sports retailer Decathlon and French DIY retailer Leroy Merlin are among those who announced on March 23 that their physical stores will be closed in the following weeks, bne IntelliNews’ correspondent in Bucharest reported. At the same time, most of them invited their customers to use the online stores — which is feasible for at least some of them. However, the non-food retailers that do not have online outlets are likely to see a sharp plunge in sales.

Work from home is the new normal

In addition to online retail, social distancing is seen as the best way to avoid infection, and with increasingly strict lockdowns across the region, the coronavirus crisis has pushed companies online in a way they have not been forced to do before.

In a webinar on March 18, Olga Pindyuk, a economist at the Vienna Institute for International Economic Studies (wiiw), commented: “to some extent [digitalisation] is happening by itself because employees are now working in home offices,” she said.

She also noted quite strong foundations for further digitalisation in the CESEE region. “There is always a silver lining and the current coronavirus outbreak seems to provide a further push for digitalisation. This may be one of the positives for our region.”

Participants in a separate webinar organised by Romanian news site Romania Insider on March 27 took the view that the crisis had pushed companies into enabling their employees to work from home — and in many cases this has been a success.

Monika Pal, HR manager at Porsche Engineering Romania, told the online forum that the company’s workforce had adapted “extremely quickly … it is amazing the new challenges we are able to overcome each day.”

Crina Ilie, people function manager at Genpact Europe, pointed out that as the firm is global it was able to learn from the experience of its Chinese offices, and therefore started early, for example putting hand sanitisers in its offices and restricting travel, before eventually moving on to full work from home for all its employees.

Not all businesses are able to take such a step: Ionut Popa, HR manager at Orkla Foods Romania, said tough decisions had to be made about who to send home to work and who to keep on site to ensure that the company’s production lines kept running.

“We had been discussing for a while to introduce work from home and how to do it. Now we are forced to do it, and we [have] found all the procedures and the working routines to make it happen. This is amazing — sometimes you just do it, and things can be solved,” said Popa.

Another Romanian business that has sent its employees home to work is Adobe Romania. The company allowed employees to take home any work equipment they needed as well as offering $250 to every employee to spend on electronics, furniture or subscriptions for phone or internet services, the company said on its Facebook page, where it also posted pictures of employees working on their laptops in their gardens.

With governments increasingly banning non-essential travel and heavily encouraging people to work from home, Romania isn’t the only country where such changes are happening. There are also reports from across the region of people buying new laptops and other equipment to set up their home offices.

There’s an app for that

In addition to allowing work from home, an increasing number of businesses are taking their client-facing operations online so they can continue to operate — even if in a limited form — throughout the crisis.

Romanian insurer City Insurance has introduced large-scale remote working, while also launching a new mobile app, CityinsClaimsAssist, for online settlement of automobile damage claims. The benefit of the app is that it “eliminates personal visits to the insurer, minimising direct contact with other people,” the company said in a press release.

Also in the insurance sector, Slovenia’s Sava Re has closed all its branch offices but continues to operate “almost completely digital”, with its employees working from home and dealing with clients by phone and email, said Polona Pirs Zupancic, a member of the Sava Re management board, during a webinar organised by the Ljubljana Stock Exchange on March 23.

Sava Re was already moving more of its operations online, and, Zupancic said, “These days we are again reevaluating the priorities with respect to the digital agenda and digital transformation because of this extraordinary pandemic.”