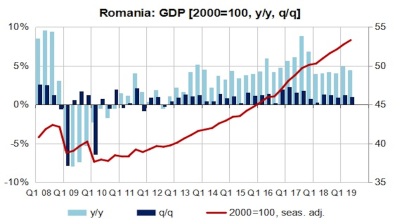 By Iulian Ernst in Bucharest September 9, 2019

Romania’s GDP increased by 4.4% y/y in Q2, while in seasonally adjusted terms it picked up by 1.0% from the previous quarter, the statistics office informed. Construction pushed up the performance of the overall economy, while industry underperformed.

Construction on the formation side and the gross fixed capital formation on the utilisation side emerged as a major pair of drivers, beside the pair of services for households and private consumption, which have supported the high growth over the past couple of years.

The volume of construction works surged by 31% y/y and the sector generated 21% more value added — resulting into an unprecedented accumulation of capital (18% more than in the same period last year). Ideally, the use of EU funds could support the construction sector, hence the accumulation of gross fixed capital formation.

From a broader perspective, the slowdown from Q1 to Q2 is not necessarily significant and the growth remains robust despite expectations of an imminent slowdown. Exactly when and how the slowdown will occur is not clear, and it depends on external factors such as the upcoming elections in November and next year

The average annual growth in the first two quarters of the year was 4.7%.

The annual growth rate eased from 5.0% y/y in Q1, when the adjusted GDP was also increasing faster: by 1.2% compared to the last quarter of 2018. The growth rate is expected to further ease toward the end of the year.

On the formation side, it is notable that the value added created by industry contracted by 0.7% y/y (in real terms), in the second quarter, while the construction sector generated 21% greater value added in the period. The services to households performed well in line with expectations: +5.0% y/y.

On the utilisation side, it is worth mentioning that the private consumption and capital formation made equal contributions to the annual rise in the demand: 3.9pp.

Robust domestic demand for investments and consumption resulted in more resources imported, since the gross domestic production advanced by only 4.4%. The net imports remain significant: 3.7% of GDP, not as much as during the previous two quarters though.

The GDP deflator, which indicates the overall rise of the prices in a country’s economy (not confined to consumer prices) was 6.2% y/y, down from 7.8% in the first quarter of the year, but still well above the consumer price inflation.