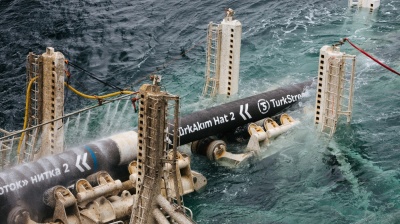 Gazprom expects to export 198- 201bcm of gas this year to Europe and could supply half of Turkey's demand. / wiki
By Ben Aris in Berlin July 9, 2019

Last week Russian state-owned gas giant Gazprom invited bank analysts on a trip to inspect the construction work on the Turkish Stream (aka TurkStream) pipeline. They report work on the pipeline is on schedule and that it is 90% complete and should go online before the end of the year.

Turkish Stream is part of a trident of pipelines running from Russia to Europe to supply gas to Gazprom’s main customers. Turkish Stream expands the southern route and is an addition to the Druzhba pipeline that runs through Ukraine and has been the main conduit since Soviet times. More controversial is the construction of the 55bn cubic metre (bcm) Nord Stream 2 pipeline that runs under the Baltics and has been the subject of bitter political wrangling.

Opponents of Nord Stream 2 claim that it will make Europe more dependent on Russian gas, but while the same argument could be made against Turkish Stream, little has been said about the latter as most of the pipeline runs through Turkey, which is not an European Union (EU) member and so the EU has no leverage over Ankara’s decision to go ahead with the pipeline.

Analysts visited the Russkaya compressor station in Russia last week, the starting point of the Turkish Stream pipeline, and the receiving Turkish Stream terminal in Turkey.

Gazprom also held a roundtable discussion at which the company and independent experts (IHS Markit, S&P Global Platts and EPPEN Consulting) provided their views and outlooks on the European gas market.

The capacity of the Turkish Stream project is 31.5bcm. It will deliver gas from Russia’s southern region to Turkey and then on to southern Europe.

“Gazprom has already finished construction of both the Russkaya compressor station and two offshore pipelines, while construction works at the receiving terminal in Turkey were 86% completed as of June 21,” VTB Capital (VTBC) analysts who went on the trip said in a note.

Gazprom reiterated its plan to bring the pipeline online by the end of this year.

The company also reaffirmed the capital expenditure forecasts for the project: the subsea section will cost more than €7bn, while investments into onshore pipelines are to reach €400mn for the pipeline section in Turkey and €1.4bn for the Serbian section (€770mn is to be spent this year), according to VTBC.

While the pipeline gives Gazprom better access to the European market and increases its capacity to bypass Ukraine completely, the main customer on the route is Turkey itself.

One of the most populous countries in Europe, Turkey has next to nothing in the way of energy resources and is heavily dependent on Russian gas. Moreover, as Turkey also has next to nothing in the way of gas storage facilities (the largest part of Gazprom’s storage facilities were built in Ukraine during Soviet times), it is also dependent on Moscow to supply gas on a demand basis through the existing pipelines. One of the advantages of the new pipeline for Turkey is the constant flow of gas over its territory on its way to Europe that will improve Turkey’s energy security.

The Turkish gas market suffered a setback last year, hurt by economic turmoil in the country, reports VTBC. “As a result, Turkish gas consumption fell 8.4% y/y to 49.3bcm in 2018, with Gazprom’s gas exports to the country falling 17% y/y to 24bcm,” VTBC reports.

“EPPEN Consulting, a Turkish consulting firm, expects gas demand in Turkey to fluctuate in a 48-50bcm range in 2019-2023. In the longer term, though, gas demand might be potentially supported by the increased competitiveness of Turkish industry due to lira depreciation, with WoodMac forecasting more than 60bcm gas demand by 2035. In this case, if both direct pipelines to Turkey (Blue Stream And Turkish Stream) were fully utilised, Gazprom might be able to satisfy up to 53% of Turkish gas demand.”

While gas prices in Europe have shrunk to a multi-year low, the demand remains strong. Last year Gazprom exported almost 200bcm to Europe, and has kept its forecast for this year at 198-201bcm and $230/kcm average price.

At the same time Ukraine’s national gas company told bne IntelliNews that it expects to be cut off from Russian gas completely on January 1, 2020 and is also building up reserves. If Russia breaks its supply and transit agreement with Ukraine at the end of this year then that could lead to shortages in Europe, hence the build-up of reserves going on now.

Analysts are less optimistic about Gazprom’s exports to Europe and are forecasting 191bcm export and $223/kcm average price. However, if Gazprom does cut Ukraine off then exports to Europe could fall significantly.