CEE equities have massively underperformed their western European peers for more than three years and their emerging markets peers since early 2014. During the first half of 2015, there was hope that a robust macroeconomic news flow in Central Europe and the bounce of oil prices could trigger a turnaround. The CECE Composite, a Euro-based index of Polish, Czech and Hungarian blue chips, gained 15% in the first four months and Micex, Russia’s broad ruble-based stock index, rose 30% in the first two months. At the end, mean reversion seemed to start working. However, in May the rebound ended and, eventually, markets reversed.

Near term a decline in European risks and better global growth data could provide renewed support, but there is no guarantee that either will happen. While a return of risk appetite would support all CEE markets in the second half of the year, other factors such as the economic and earnings outlook will help Central European but not Russian stocks. For both Central Europe and Russia a return of a prolonged, i.e. multi-year, period of outperformance versus western European markets is not on the cards. 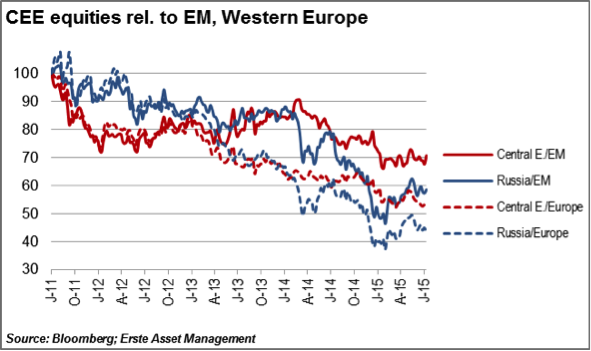 The main support for Central European stocks will likely come from the ongoing recovery of the Eurozone economy. Manufacturing PMIs (among other indicators) suggest that Central European economies have outgrown the Eurozone economy already since the second half of 2014 and, as long as European growth is accelerating, Central Europe will benefit. While it is true that macro releases in the Eurozone since March have disappointed and also Greek-related turbulences may have hurt business sentiment, the data flow in the Eurozone has turned less negative recently. Consensus forecasts still assume European growth will strengthen in the second half of the year, reflecting the impact of the weak euro plus the ECB’s monetary largesse.

In Russia, the economic backdrop has deteriorated in the second quarter, particularly consumption. While the situation will improve in the second half of the year, the economy is expected to shrink by 3.5% in 2015 according to consensus estimates, and growth will likely stay anaemic in the following two years. 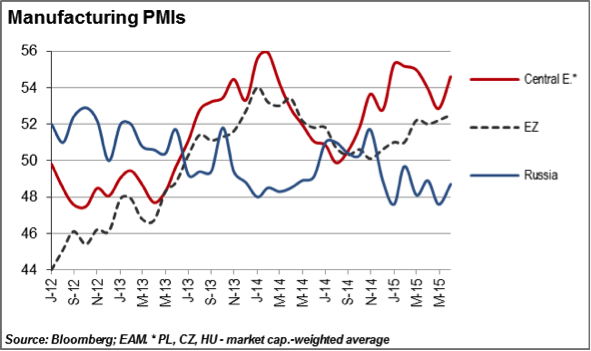 Weak oil and metals - a drag on Russia, not on Central Europe

One of the obvious reasons why Central Europe and Russia are in different stages of their cycle is the weak commodity backdrop. While Russia suffers, Central Europe – on balance – benefits. In the Russian stock market, oil and metals together account for nearly 70% of the market, while in Central Europe this number is around 25% and, as far as oil is concerned, the exposure is more to downstream than to upstream. It is unlikely that commodities will manage a lasting rebound near term. While consensus forecasts for both hydrocarbons and industrial metals are pointing upwards, it is not obvious what the trigger will be. Crude oil as well as many industrial metals remain oversupplied and China, the commodity buyer of last resort in recent years, is facing slowing growth. As far as oil is concerned, the return of Iran to the market will also weigh on prices, although the actual impact on volumes will be limited in the foreseeable future.

Following the Greek rescue deal, risk indicators have been falling across the board (except the euro, which failed to strengthen in contrast to the “normal’” pattern). Markets are turning more risk-tolerant again, which will support CEE stocks. Historically Russian indices have shown a higher beta [sensitivity to risk] than Central European indices and, therefore, will likely benefit more from the de-escalation between core Europe and Greece. There is a big caveat, however: it is very probable that the Greek conflict will flare up again, as many commentators from both sides of the debate have argued. 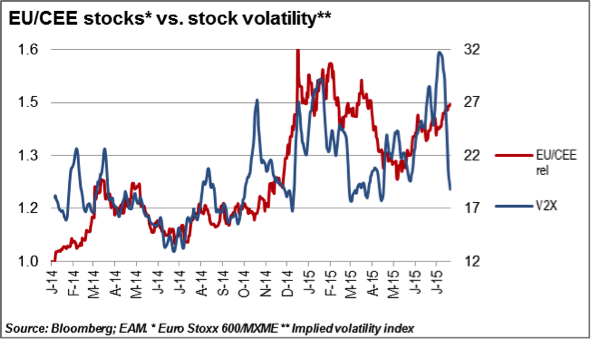 Even if European risks will recede further – a big if – the US Federal Reserve Bank is well placed to fill in as the main source of risk in the second half of the year. As I argued elsewhere, previous cases (in 1999 and 2004) showed that the medium-term impact of a rate lift-off need not necessarily be harmful. That said, the immediate market reaction will most certainly be negative.

From a valuation and earnings perspective, Central European stocks are better placed for another upswing in the second half of the year than their Russian peers. After trading broadly in line with western European stocks and well above emerging market peers for two years, a better earnings outlook for 2015 (with consensus earnings up 80% vs 2014) has pushed the forward PE down to 12.6x. This is in line with the EM average and 20% below the western European average. 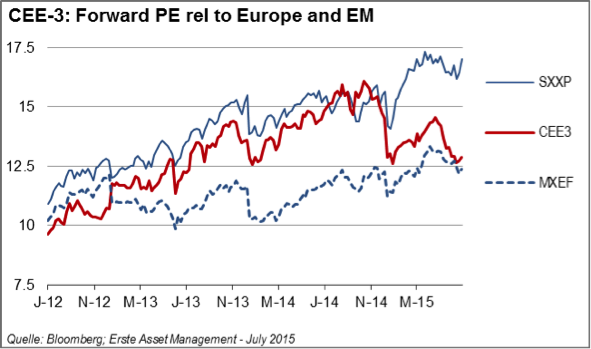 In contrast, in Russia index gains in the first months of 2015 plus the expected drop in earnings (in US$) by 14% after an even bigger fall the year before have mostly erased the market’s appeal in valuation terms. The overall market is now trading above 7x trailing earnings – the highest figure since year-end 2010 – and the non-oil space is trading on more than 11 times earnings. The discount to EM peers is still massive, but mostly reflecting the high share of the oil and gas sector in the Russian index. Outside this sector, the valuation discount has shrunk to about 20%, which seems justified given the country’s feeble macroeconomic backdrop and remaining geopolitical risks.

Bottom-line: The second half could bring some relief for CEE equity markets, but risks remain. Central European markets appear more attractive than Russia at this point.