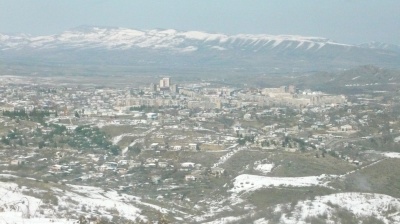 Even when the mountain roads aren’t clogged with snow and your driver doesn’t accidentally mow down one of his neighbours, it takes the best part of a day to travel from the Armenian capital Yerevan to Stepanakert, the capital of the dispute enclave of Nagorno-Karabakh. I made the journey on an unseasonably cold day in March 2012 when – in stark contrast to now – there was a sliver of hope that the historic conflict that kept Armenians and Azerbaijanis at war and Nagorno-Karabakh internationally isolated might reach some kind of peaceful resolution.

Early in the morning I took a shared taxi with three local women from Yerevan’s central bus station to cover the 250 kilometres from Yerevan to Goris in the Zangezur mountains close to what under international law is Armenia’s border with Azerbaijan. Since the war of 1988-94, however, the land to the east of Goris, stretching north between Armenia and Nagorno-Karabakh, has been illegally occupied by Armenia.

Goris appeared out of the snow as vague grey shapes behind a white curtain. Having explained I wanted to continue on to Stepanakert, I was bundled out of the first taxi into another. With only one passenger, the driver took a detour to his home in an old Soviet apartment block to pick up the rest of the family. His heavily pregnant wife settled herself in front; I was squashed up in the back with grandma, four small children and all the luggage that didn’t fit in the boot. As soon as he reversed the laden down car skidded on the snow. There was a jolt, a loud thunk, then screams. He had knocked down one of the neighbours. Her black-clad body was twisted on the ground, shopping scattered around, her blood deep red on the white snow.

Tears, shouts and berating followed until an ambulance arrived. The driver was no longer going to Stepanakert. Instead, another neighbour took me back to the taxi rank where I was bundled into a different car, a long low Mercedes with leather seats inside and three men already sitting on the back seat. As we slowly drove out of Goris and up into the mountains, the driver, who introduced himself as Robert, told me he did the journey from Yerevan to Stepanakert to and fro a day each way, three times a week with a day off on Sunday. His driving on the road that hugged the mountainside was sure and careful. All around peaks loomed up into the clouds, in the deep valleys below the rocks and trees were quickly being covered in white. I was deeply thankful not to be attempting this journey with the man who hadn’t managed to leave his courtyard without running down his neighbour. 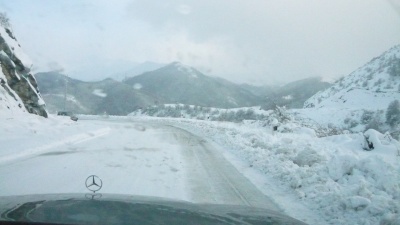 To get from Armenia to Nagorno-Karabakh I had to cross illegally occupied Azerbajani land along the so-called Lachin Corridor.

While Nagorno-Karabakh changed hands several times in the colonial era, the war was perhaps an inevitable consequence of the map drawn early in the Soviet era. As a sop to neighbouring Turkey, Nagorno-Karabakh, despite having a 90% Armenian population, was placed inside the Azerbaijani SSR. When the Soviet Union started to disintegrate in the late 1980s, a movement pushing for Nagorno-Karabakh’s independence emerged. After several years of clashes a 1991 referendum in which Armenians voted for independence prompted the outbreak of full-scale war, with Azerbaijani forces on one side pitted against Nagorno-Karabakh Armenians supported by Yerevan.

With thousands dead and hundreds of thousands displaced, a Russian-brokered ceasefire was declared in May 1994, but despite the efforts of the international community through the OSCE’s Minsk Group a peace settlement has never been reached. Today Armenians control not just Nagorno-Karabakh but large swathes of Azerbaijani territory bordering the enclave, while Azerbaijan holds areas of Armenian territory.

The “border” to Nagorno-Karabakh was a small military hut, where soldiers inspected my passport and handed over a slip of paper for me to present to the foreign ministry.

My first sight of Stepanakert, the city of around 55,000 people that is the unrecognised republic’s capital, was from the top of a steep cliff that revealed the city spread across a broad valley with more mountains looming behind it.

That this was a city in a conflict zone was easy to see from the uniformed soldiers strolling through the streets and the military vehicles on the roads. By 2012 the sporadic border incidents between the two sides were gradually becoming more intense – a process that would erupt into the four-day war in 2016. But at the same time regular meetings between Azerbaijani President Ilham Aliyev and then-Armenian president Serzh Sargsyan were taking place, offering some hope of an eventual negotiated settlement.

Aside from the soldiers, and landmarks like the burnt out remains of the children’s drama theatre, Stepanakert was not so different from any other small city in a remote corner of the former Soviet Union. There were the large square official buildings and the concrete apartment blocks. When the sky cleared and the sun came out residents made use of pulleys strung between the buildings to hang out their washing, so I walked under a canopy of strangers’ dripping socks, shirts and bedsheets. 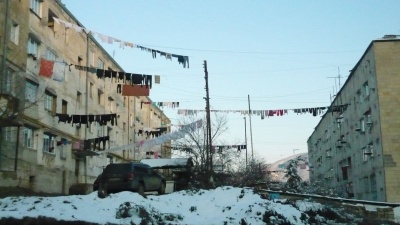 Much of the central street had been rebuilt, and there was building work going on in the surrounding streets. Nagorno-Karabakh has benefited from investment and aid from Armenia’s huge diaspora and support from Yerevan, and according to local statistics the economy was growing, albeit from a very low base. However, as everyone I interviewed on the trip including Nagorno-Karabakh’s Economic Development Minister Kazen Jesayan made clear, the republic’s still unresolved legal status made it almost impossible to bring in international investors.

There was a bus station beside Stepanakert’s busy central market and I took a bus on the short journey to the nearby town of Shushi, a one-time Soviet mountain resort that later became one of the most important Azerbaijani wartime positions. Azeri forces used the town to shell Stepanakert, but in 1992 it was captured, then looted and burned by Armenian forces.

Even two decades later, the evidence of the war was all around in the burnt out houses, abandoned factories and skeletons of other buildings. 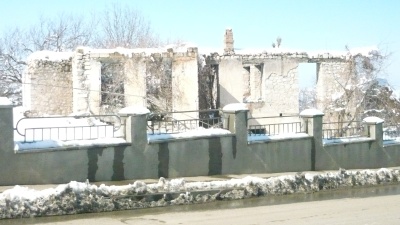 Still, life went on. Even in Shushi there were landmarks like the Holy Saviour Cathedral, restored and reconsecrated after being used to store weapons during the war. Back in Stepanakert, teenagers came out to roller-skate in the big square in front of the presidential palace, and young adults gathered at Tashir Pizza to eat, drink, smoke and flirt with each other. People got married, had children, strove for a better life for themselves and their families, died and were buried. It was life as normal, or as close to normal as possible in the midst of a frozen conflict zone.

In the years since then, there have been outbreaks of fighting in the border areas, the most serious being the four-day war in 2016.

Then, over eight years later on September 27, 2020, large-scale fighting broke out around Nagorno-Karabakh. Both sides blamed the other for reigniting the conflict. Fierce fighting has raged for the last two days. As of late on September 28 the death toll had risen to 95, and most of those killed were combatants from Nagorno-Karabakh as well as at least 11 civilians. Azerbaijan has reported two fatalities.

The fear now is not just of a new and bloody war between the old enemies but that regional powers could be dragged in potentially embroiling Russia, Turkey and – in a worst-case scenario – fellow Nato members in a much larger conflict. The precarious normality that has endured for the last 26 years could finally be shattered. 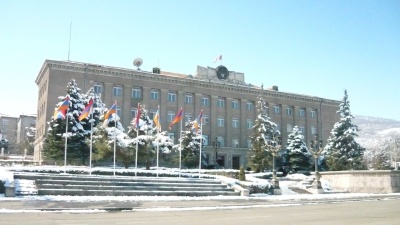 CAUCASUS BLOG: Armenia’s day of crisis delivers anticlimax
CAUCASUS BLOG: Georgia’s corrupted anti-corruption strategy
CAUCASUS BLOG : What can Biden offer the Caucasus and Stans, all but forgotten about by Trump?