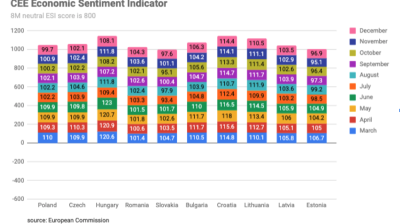 The European Commission’s batch of Economic Sentiment Indicators (ESIs) fell sharply in December, although they remain consistent with regional GDP growth holding steady at around 3.6% y/y in Q4. Robust domestic demand should help to cushion any slowdown in growth over the course of 2020.

The ESIs rose in five of the ten Central and Eastern European (CEE) economies that we cover and fell in the remaining five. Our CEE GDP-weighted ESI fell from 103.2 in November to 102.3 in December, a touch above its three-year low of 102.0 in October. On past form, the ESI is consistent with regional GDP growing at around 3.6% y/y in Q4, in line with Q3’s outturn.

The weakness was concentrated in Central Europe, which reflected falls in the services, manufacturing and construction subcomponents. Our weighted regional average of the industrial surveys fell to its lowest level since December 2013, driven by further weakness in Hungary, Poland and Slovakia. Industrial confidence ticked up from its six-year low in the Czech Republic. One bright spot was in the Baltics, where manufacturing confidence improved across the board.

Sentiment in the services sector deteriorated in Central Europe to a three-year low, suggesting that weak external demand is filtering through to domestically-focused sectors. Finally, the sharp drop in construction sentiment was entirely driven by Hungary, where the indicator fell to a two-and-a-half-year low. This offers signs that the recent investment boom, which has been supported by rapid construction activity may come to an end this year.

All told, the latest ESIs suggest that growth in Central and Eastern Europe came off the boil at the end of last year. Weak external demand will remain a headwind to industry this year, but loose policy should support domestic demand and help to cushion any slowdown. 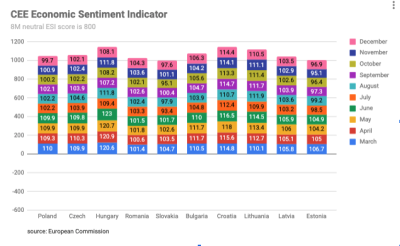 ING: Russia balance of payments: supportive of ruble in the near-term, but risks for 2H21 mount.
1 day ago
ING: Growth in the Balkans: from zero to hero again?
7 days ago
FPRI BMB Ukraine: Most Ukrainians are optimistic about 2021 – poll
7 days ago
COMMENT: Record high debt levels will slow post-coronavirus recovery, threaten some countries' financial stability, says IIF
10 days ago
COMMENT: The Manafort Pardon: a finger in the collective eyes of Ukrainians
15 days ago