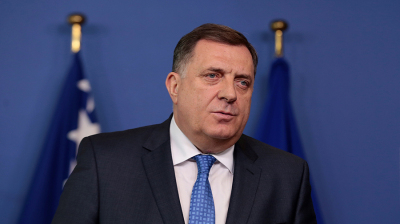 Milorad Dodik, the Serb member of Bosnia & Herzegovina's tripartite presidency, said on October 8 that Republika Srpska will withdraw its representatives from the joint armed forces, then from the top judicial body and the tax administration.

Such secessionist rhetoric is nothing new for Dodik, but many in Bosnia are watching with concern what the top Bosnian Serb politician is saying.

Dodik’s announcement follows his claim last month that if Bosnia does not return to the original Dayton constitution, Republika Srpska will declare independence and withdraw its representatives from the joint army, judiciary and tax administration.

Since then he has softened his latest rhetoric a bit. On October 10 he said he was ready to talk to any domestic politician in Bosnia — but only without foreigners present. According to local media, he said that he was ready to talk to the Bosniak member of the presidency Bakir Izetbegovic and the Croat member Dragan Covic, but only within the framework of the Dayton Constitution. This was the only way for Bosnia to survive, he added.

Many in Bosnia remain disturbed by Dodik's latest statements, especially after journalist Arijana Saracevic tweeted that six buses full of members of the Serbian Army had crossed the border near Zvornik, heading in an unknown direction. (The claim has not been confirmed, and there have been no further sightings of the soldiers.)

On the other hand, the top Bosnian Serb politician has repeatedly employed secessionist rhetoric, yet for now Bosnia remains intact and the much talked of secession referendum in Republika Srpska has never taken place.

Talk but no action… yet

It’s more than a decade since Dodik said back in May 2011 he would never give up on a referendum on separating Republika Srpska from Bosnia. In February 2012, he said that Bosnia would soon disintegrate on its own. In February 2014, Dodik said that Serbs never even wanted to be in Bosnia, and in September 2015, he announced a referendum on the separation of Republika Srpska from Bosnia.

Other Bosnian Serb politicians are sceptical about Dodik's latest radical rhetoric. Mirko Sarovic, president of the largest and strongest opposition party in the entity, the Serb Democratic Party (SDS), told local media that Dodik had not consulted or informed Republika Srpska institutions about his new initiative. "I think that this cannot be done. It is not serious. Any such an initiative from such a high place must be clarified before it is published in the institutions. I am afraid that it is only an initiative for party purposes," said Sarovic.

Sarovic added that he did not see a way for such an initiative of Dodik to be implemented, especially since the deputies of Dodik's Alliance of Independent Social Democrats (SNSD) party once voted for the transfer of the competencies in question from Republika Srpska to state level. Asked whether the SDS, as well as the rest of the opposition, would vote for Dodik's ideas if they meet at a session of the Republika Srpska National Assembly, Sarovic said it was too early to talk about it and that the proposer should first explain the details of the initiative. He added that the session was not even scheduled and it is not known whether it will be.

Komsic reacted strongly to Dodik’s comments, saying that “the whole of Republika Srpska could pay the price for Dodik's latest madness.”

“He can say whatever he wants, except to deny genocide, he is criminally responsible for that. It is absolutely irrelevant what he will do and what the Republika Srpska National Assembly will decide, because they do not decide on that. Such decisions can possibly be made in the Bosnian Parliamentary Assembly,” Komsic said to Klix. Other politicians in Bosnia say the entity parliament cannot overturn decisions approved by the state parliament.

Senad Sepic, president of the Independent Bloc from the Bosnian Federation, said that it was obvious that Dodik's political end was approaching. America and the entire democratic world should stand on the side of Bosnia and its laws and help remove Dodik and all those for whom sanctions are being prepared, he added. US Deputy Assistant Secretary of State Gabriel Escobar warned Dodik on September 30 that his continued secessionist threats were unacceptable to the US because they directly threaten the Dayton Accords and could only lead to the complete isolation of Bosnian Serbs and Republika Srpska.

“Any kind of isolation, especially economic, could be disastrous for the Republika Srpska, so it is primarily in our interest to pursue a reasonable and wise policy, preserving the dignity and integrity of the Republika Srpska, but also without entering into unnecessary conflicts, gambling, adventure, etc. People who aim only to collect political points for daily use in the long run they can be a serious problem,” said Branislav Borenovic, the president of the Party of Democratic Progress (PDP), the second largest opposition party in Republika Srpska, as reported by local media.