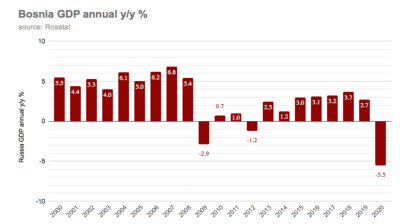 According to the current projection, economic activity is expected to grow by 3.4% in 2021, which is 70 basis points more than projected six months ago. Although the beginning of 2021 was affected by the coronacrisis, a stronger-than-expected recovery in certain high-frequency indicators, such as industrial production and exports of goods, in the first quarter, points to more dynamic economic activity in 2021, said the central bank on its website.

Projections of variables representing foreign demand were also revised to higher values. It also influenced the assessment that economic activity in Bosnia & Herzegovina in 2021 will be stronger than expected at the end of 2020.

With these corrections of the projected economic activity rates to higher levels, the level of real GDP from 2019 could almost be reached by the end of 2021. The growth of personal consumption in 2021 is based on positive indicators related to the labour market, the projected decline in the number of unemployed, a slight increase in employment and average net wages, and the growth of remittances from abroad. Compared to the previous round of projections, the central bank slightly raised its forecast for the recovery of personal consumption by the end of 2022, saying the situation in 2020 exceeded its expectations in terms of labour market flexibility and speed of recovery, especially the service sector. However, the CBBH said it remains “quite conservative” in terms of the unemployment rate trends and the speed at which the Bosnian labour force could be employed in the EU in the short term, which affects personal consumption.

According to the first available data for 2021, the growth of exports of goods and a somewhat slower recovery of domestic demand (which slows down the growth of imports) will result in a less negative contribution of net exports to the GDP growth. With the growth of economic activity, in 2022, the bank expect a further deepening of the foreign trade deficit. Growth of revenues from tourism is projected in 2021, but it does not expect the trend to intensify before the second half of 2022.

In the previous round of projections, GDP growth in 2021 also relied on government spending growth. In this round of projections, the bank has revised downwards the positive impact that government spending will have on economic activity in 2021. The first quarter of the current year was marked by the tightening of business entities measures, mainly from the service sector, which further affected fiscal revenues and extended subsidies. In the medium and long term, the intensity of government spending could be further limited by the amount of public debt, but also by due liabilities related to public debt servicing.

In the projection period, a slight increase in inflation is expected. The growth of prices during 2021 will be influenced by the increase in transport prices, following the expected growth of energy prices on international markets. The central bank expects the impact of domestic aggregate demand on consumer prices to strengthen in 2022. Inflation projections are consistent with the projected trend in economic activity. However, prices are subject to stronger shocks, and the inflation projection in the coming periods could be significantly revised upwards. Factors that could cause an inflationary shock include continued growth in global freight prices, strong possible growth in metal prices and strong changes in exchange rates relevant to international trade in goods.

Overall, the central bank stressed that its forecasts are exposed to an extremely high degree of uncertainty related to the development of the epidemiological situation.

The CBBH said the risks are balanced. Upside risks include higher vaccination coverage of the population by end-2021, strong growth of industrial production and recovery tourism. However, the Bosnian economy could perform less well should there be a strong inflationary shock delaying the recovery of personal consumption, or a new wave of the pandemic. Narrowing the fiscal space could negatively affect public investment, and extending the period of weak economic activity would slow down banks' lending activity, the bank warned.

The CBBH will publish its next round of medium-term macroeconomic projections for the period 2021-2023 in November.