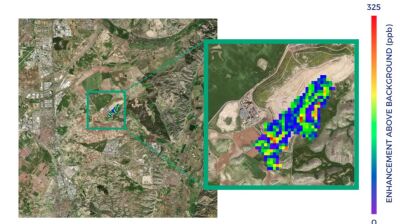 Plumes of methane leaking from a landfill in Spain detected by Canadian company GHGSat / ESA/GHGSat
By Richard Lockhart in Edinburgh November 17, 2021

Data from the TROPOMI instrument on the European Sentinel 5P satellite, which is part of the Earth-observing constellation Copernicus, has detected methane at and oil and gas pipeline in Kazakhstan and at oil and gas production facilities in Turkmenistan, Space.com reported.

"We see quite a lot of those super-emitters," Ilse Aben, senior scientist at the Netherlands Institute for Space Research (SRON), told Space.com. "These are large emissions, and we see a lot of them on the global scale – much more than we had expected."

Aben heads a team of experts working with data from an instrument called Tropomi (for TROPOspheric Monitoring Instrument) that flies on the European Sentinel 5P satellite, which is part of Copernicus.

Sentinel 5P launched in October 2017, and Tropomi started providing data a few months later. In the years since, scientists have slowly learned how to reliably interpret its measurements.

Although the Tropomi instrument detects emissions with a crude resolution of 5.5 by 7 km, the Tropomi team collaborates with Canadian company GHGSat, which currently flies three methane-detecting satellites, the first of which launched in 2016.

GHGSat provides a much more detailed resolution of 20 metres, which enables the company to do finer detective work.

"With Tropomi, we look for these hotspots on a global scale," said Aben. "We measure methane across the globe every day, and then we provide these locations to GHGSat and they can zoom in and pinpoint the exact facility that is leaking those emissions."

The European Sentinel 2 and Sentinel 5P satellites have detected methane leaks from a gas pipeline in Kazakhstan.

Over the last two years, Tropomi's operations have also detected preventable emissions from oil and gas fields in Turkmenistan.

The installations should have built hardware that would flare off, or burn, the methane, thereby preventing it from leaking into the atmosphere.

However, the satellite has detected that this is not happening, suggesting that flaring is not taking place, either deliberately or because the technology is not working.

Reducing flaring is a major issue across the oil and gas industry, and producers are making efforts to reduce it, often as part of their ESG commitments.

However, the satellites are providing new ways of ensuring that such commitments are being met.

Most of these events happened during maintenance work. Surprisingly, Kayrros detected 40% more leaks in the pandemic year 2020 compared to 2019, in spite of the overall reduction in gas imports from Russia to Europe, which was reported by the International Energy Agency (IEA).

Methane is 80 times more potent than carbon dioxide in terms of global warming, although it stays in the atmosphere for a much shorter time.

Methane was a major focus of the COP26 conference in Glasgow, when countries agreed to reduce methane emissions by 30% by 2030, while the gas also featured in the US-China bilateral climate agreement agreed at the event in Scotland.

The Global Methane Pledge could account for 800mn tonnes of CO2e reductions by 2030, according to Climate Action Tracker.

Ending coal-fired power generation could prevent 14.5mn premature death from air pollution between now and 2050 and would create up to $16.3 trillion in economic benefits.

If successful, DEM's project to exploit the geothermal energy potential of a dry, unproductive well could be replicated around the world.

Ending new oil, gas and coal developments is not enough to reach net zero by 2050, according to new research. Instead, already built fossil fuel projects must be decommissioned early if climate change is to be limited to 1.5°C.

Human activity has caused irrevocable damage to the climate, causing hundreds of billions of dollars of economic damage and threatening water and food supplies to millions of people.

The European Commission has set 2027 as its target date for ending Russian energy imports, warning it would require €300bn of fresh investment and that new short-term spending on fossil fuel infrastructure would be needed.