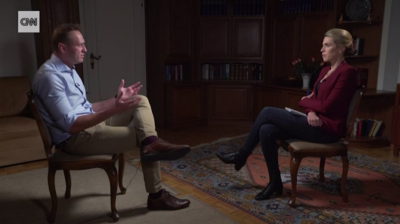 An investigation conducted by Bellingcat has found eight FSB agents followed opposition activist Alexei Navalny on 47 trips around Russia and has accused them of poisoning him / wiki
By bne IntelliNews December 15, 2020

Bellingcat and The Insider have named the alleged poisoners of opposition activist Alexei Navalny in a damning investigative report released on December 14 that details the FSB involvement in the poisoning of anti-corruption blogger.

The FSB agents work in a secret FSB institute Bellingcat and The Insider, with the participation of CNN and Spiegel, found “that leaves almost no questions about who was behind the poisoning of Alexei Navalny, and proves that the poisoning had been prepared for several years and could not have been carried out without the knowledge of the FSB leadership,” The Bell concludes.

The investigation identified the names of eight people directly involved in organising the attack. All of them are employees of the FSB Institute of Criminalistics.

The investigation was published in English by Bellingcat and CNN, and in Russian by The Insider and Navalny himself, who added details of how twice before August 2020 he and his wife Yulia experienced bouts of severe illness on trips for no apparent reason.

The findings of the investigators are based on a comparison of the billing of telephone conversations of FSB officers from databases on the black market and data on their phone numbers from the GetContact service with their flights and Navalny's flights.

“Most of the information we used in the investigation could not have been found in Western countries. But in Russia it is available either free of charge or for a modest fee,” Bellingcat explain in a separate article on the methodology of their investigation.

Navalny himself thanked Irina Yarovaya for her help in the investigation: “Thanks to the so-called Yarovaya package, corrupt law enforcement officers freely trade in the data of our mobile phones.”

The persons involved in the investigation are employees of the Institute of Forensic Science of the FSB (aka NII-2 FSB or military unit 34435), which, according to unofficial data, runs a laboratory that produces secret poisons for special operations.

The Insider revealed eight names of employees of the Institute of Forensic Science of the FSB, who, according to it, were directly involved in the preparation of the assassination attempt, from one of the leaders of the institute, Stanislav Makshakov, to ordinary players. Some of them are former doctors and chemical protection specialists; some are former military or special forces.

Institute staff have been monitoring Navalny since at least 2017. They made 47 trips in the same directions as Alexei Navalny flew or went, on the same or neighbouring days, flying parallel flights with the politician. Tickets were bought both under the real names of the institute employees and under pseudonyms.

The first attempt to poison Navalny, according to The Insider, took place in July 2020 in Kaliningrad. During this trip, Navalny's wife, Yulia, for no obvious reason, suddenly felt “as bad as I have never felt in my life,” but the next day the bad state of health passed. Immediately after that, Major General Vladimir Bogdanov, head of the FSB Special Equipment Centre, to which the institute is subordinate, flew to Kaliningrad for three days. Navalny himself spoke about another similar episode “a couple of years ago”, when he felt “so bad that I’m going to die” on one of his trips. At that time, the malaise passed in 15 minutes.

In August 2020, the same FSB officers flew with Navalny to Novosibirsk and Tomsk, after which the opposition activist was poisoned. The Bellingcat investigation pinpoints the probable source of the poisoning for the first time – a Negroni cocktail, which was served to him late in the evening before his emergency hospitalisation on August 20 by a bartender at the Xander hotel bar. Navalny himself asked for a Bloody Mary, but the bartender said that the bar lacked the necessary ingredients and offered the Negroni to replace it. According to the oppositionist, he took only one sip, because "it tasted the most disgusting thing I have ever drunk." This event coincided in time with a spike in call activity from the alleged FSB task force.

On the day of the poisoning, all three suspicious companions of Navalny returned their tickets for the Tomsk-Moscow flight. Navalny became ill on board a plane en route from Tomsk to Moscow on the morning of August 20.

Navalny himself called the incident "state terrorism." He is sure that the order to kill him was given by Vladimir Putin, and the impetus for this was the announcement made by Navalny at the end of 2016 that he would go to the presidential elections. A few months later, employees of the FSB Institute of Criminology began to follow the opposition activist.

The Kremlin or other Russian government agencies had yet to comment on the investigation by Monday evening.

US and Chinese slowdown will tip the world into recession, says IIF
New Putin decree could force foreign stakeholders out of Sakhalin-2 gas project
Russia threatens to sever diplomatic relations with Bulgaria over diplomat expulsions