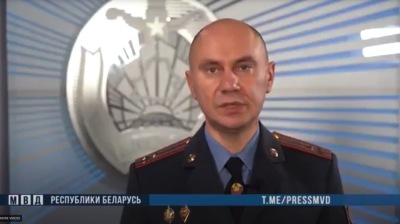 The Belarusian Ministry of Interior Affairs said it is willing to use live ammunition and weapons against protesters if they continue in their “radical” manner in a statement
By bne IntelliNews October 12, 2020

Belarus’ Ministry of Interior Affairs released a statement on October 12 announcing it was willing to use live ammunition and weapons against protesters if they continue in their “radical” manner.

The statement represents another red line crossed as the levels of violence at the ongoing mass protests have been ratcheting up slowly, but inexorably, every week.

Shots have been fired at two of the Sunday mass rallies, where a single officer fired a rifle into the air on two separate occasions. The Ministry of the Interior later clarified saying the shots were anti-riot blanks and gun cartridges found afterwards, the pictures of which were shared on social media, seemed to confirm the statement.

However, things went up several notches the following weekend on September 27 when masked OMON officers used stun grenades against protesters in the regional city of Homiel, liberally doused the crowd with pepper spray and fired multiple shots into the air to turn back a marching crowd on its way to the centre of the city, which ran to escape the onslaught.

The Homiel reprisals were by far the most violent since the initial brutal crackdown by police on the protesters in the first three days after the August 9 presidential election.

After the state realised it had gone too far there was a week when protests were able to proceed unimpeded, but the hiatus was short-lived. After Russia threw in its lot with Lukashenko when Russian President Vladimir Putin promised to provide him with police forces – “Russian President Vladimir Putin statement that he was willing to send a special military unit to quell the protests “if necessary” on August 27 – Lukashenko has been trying to retake the initiative and the violence is being slowly, but steadily, ratcheted up again.

In the first weeks the OMON were reluctant to manhandle women who formed phalanxes around male protesters to prevent them from being detained. However, that red line was crossed a few weeks ago and women have been as roughly treated as the men during recent marches.

OMON are increasingly using their clubs against protesters and a leaked video this week showed security forces forming a cordon to meet freshly arrived detainees at detention centres and beating them with clubs as they ran the gauntlet to the entrance of the building during Sunday’s mass rally.

Now the next red line has been crossed as the OMON

As Lukashenko has famously done nothing to combat the spread of the coronavirus (COVID-19) epidemic in Belarus, these women were taking their lives in their hands to gather in large numbers and most of them, but not all, were wearing masks.

They were quickly confronted with OMON that tried to break the rally up. In one incident OMON tried to arrest some journalists but were surrounded by babushki who pelted them with flowers and they decided to back off.

In another incident several old babushki were detained and put into waiting buses. A large crowd of women blocked the road and demanded the OMON release the women on board, berating the young men in full riot gear and shrieking, as has become common for the women protesters to do, as it unsettles the OMON troops, who are unsure of how to respond.

Knots of old ladies linked arms and shouted at the OMON, chanting “fascist!” while others gathered in front of the bus to prevent it leaving. The officers backed off, apparently unwilling to use violence against such an obviously helpless gathering but at the same time intimidated by the ferocity of the pensioners and their obvious lack of anxiety in the face of overwhelming force.

“Pensioners blocked the road with OMON bus and demanded the release of detainees. The women left the road only after one of them made sure that no one was left in the transport,” reports Franak Viacorka, a local journalist said on Twitter.

There has been much speculation on Belarusian social media as to whether Lukashenko will go through with his threat to shoot protesters. Most agree that he would be unlikely to order security forces to open fire without Moscow’s approval. Other say that the security services would refuse to carry out the order. And a few say that Lukashenko is not acting rationally, as he has been backed into a corner and is now capable of doing anything if he thinks it will keep him in office.