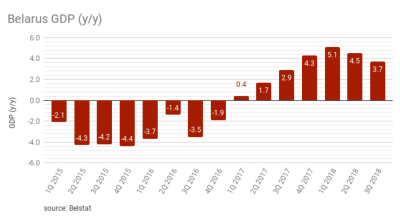 The Belarusian economy has been recovering well on the back of the ongoing recovery in neighbouring Russia, the post-Soviet country's main trade partner. Belarus' GDP grew by 2.4% y/y in 2017 after two years of recession. It contracted 3.9% y/y in 2015 following 1.6% y/y growth in 2014.

Recently, the Belarusian government was forced to revise downward its forecast for the country’s GDP growth in 2019 (from 4.5% year-on-year to 2.1% y/y), according to the nation's new Economy Minister Dmitry Krutoy.

According to Belarusian officials, the new forecast take into account recent changes in the external economic environment, including changes in oil prices and the economic situations of the country's major trading partners, specifically, in Russia, and the values of their currencies.

According to Krutoy, the target scenario was initially based on an oil price assumption of $70 per barrel, but the assumption was eventually reduced to $65 per barrel, BelaPAN news agency reported on August 29.

He added that the forecast estimates "fully take into account" the negative consequences of Russia’s so-called tax manoeuvre for Belarus, even though it has been agreed with Russian authorities that mechanisms of compensating Belarus for its losses from the tax manoeuvre will be negotiated before the end of this year.

According to the Belarusian authorities, Belarus’ budget revenue losses from the tax manoeuvre in 2019 alone are estimated at BYN600mn ($300mn).