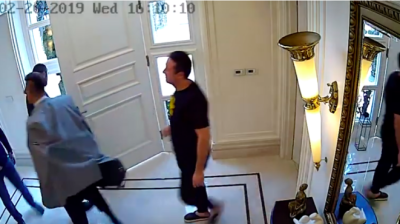 She was appointed to head investigations into top-level crime and corruption under North Macedonia’s previous administration, but former chief special prosecutor Katica Janeva is now on trial herself, accused of taking part in an operation to extort €1.5mn from one of the country’s richest men.

The Special Prosecution Office (SPO) was set up under the 2015 Przino Agreement brokered by the EU to end months of unrest in the Balkan country. Its purpose was to investigate allegations against current and former politicians, senior government officials and top businesspeople based on illegally wiretapped conversations between senior officials that were released by the then opposition Social Democratic Union of Macedonia (SDSM) — and dubbed the “bomb” because of their politically explosive nature.

Cases brought by the SPO and tried by the courts in North Macedonia resulted in investigations into former prime minister Nikola Gruevski — who fled the country to avoid serving a prison term — as well as other politicians who served under the conservative VMRO-DPMNE governments between 2006 and 2017, among them former interior minister Gordana Jankulovska, ex-transport minister Mile Janakieski and Gruevski’s cousin, ex-intelligence chief Saso Mijalkov.

However, in July it was sensationally revealed that Janeva herself was suspected of links to two men detained in a case dubbed “Extortion” and her mobile phone was seized. She was detained in August as the third suspect in the case after leaked audio recordings revealed by Italian daily La Verita pointed to her involvement in the racket.

The initial two suspects were Bojan Jovanovski, aka Boki 13, the owner of the now bankrupt 1TV station who is better known to the public for his participation in Balkan reality shows as a transvestite, and businessman Zoran Milevski, known as Kiceec.

Jovanovski and Janeva are now on trial, accused of extorting money from businessman Orce Kamcev, a suspect in the “Empire” case also launched by the SPO. Milevski has already been sentenced to three years in prison after pleading guilty.

Prosecutors told the Skopje court hearing the case that the suspects promised Kamcev that he would avoid a prison sentence in the Empire case if he paid them off.

Kamcev was put in detention on November 10, 2018 during the probe into the Empire case on suspicion of criminal association, abuse of position, fraud and money laundering. He was known to be close to the conservative VMRO-DPMNE party when it was in power. The Empire case focused on Kamcev’s business empire and his relations with Gruevski’s cousin Mijalkov.

Appearing as a witness in the Extortion case on December 6, Kamcev claimed that the Empire case was created by the SPO in order for the suspects to extort money from him.

Forbes magazine named Kamcev as Macedonia's richest person in 2016. He is an owner of Orka Holding and the Sistina clinic, and he and his family are also involved in many businesses in North Macedonia, including in the hotels, food and dairy sectors as well as the real estate sector.

Kamcev told the court that Janeva and Boki 13 were extorting money from him but that other people were also involved in the racket, pointing to prosecutor Lile Stefanova and a lawyer, who was a brother of the judge Vesna Dimiskova.

Kamcev recalled that his wife Ana gave the first €500,000 to Milevski while he was in detention last year. Ana Kamcev will testify in court on December 10.

After Kamcev realised that he was the subject of a racket he decided to give Jovanovski €1mn and to record the process with home security cameras and cell phones, on the advice of his Bulgarian friends.

Video footage released by La Verita this summer shows Jovanovski and Milevski leaving Kamcev’s home, presumably while the latter was under house arrest, carrying a bag of money.

In his testimony, Kamcev said there were no politicians involved in the racket. He claimed that Boki 13 defamed many current politicians, who were not related to his criminal scheme, by showing photos of them to prove that he has top-level connections.

During the trial, Janeva said that she does not feel the slightest guilt for what she was charged with. Jovanovski also pleaded not guilty.

However, the sentence already issued for Milevski indicates that Janeva and Jovanovski will not escape prison sentences. Janeva could be given up to eight years in prison after being accused among other things of receiving a bribe of €50,000 while in office, promising in return that the Empire investigation would go in Kamcev's favour.

The SPO was once one of the institutions which enjoyed great support from citizens who hoped it would solve crime and corruption-related cases connected to the previous VMRO-DPMNE government, but expectations faded following the scandal.

Following the detention of Janeva, who had the main say in SPO cases, all cases will be taken over by the Public Prosecutor Office (JORM).