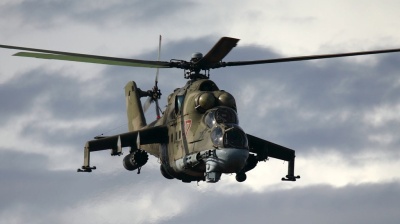 A Russian Mi-24 military helicopter has been shot down over Armenia, near the border with Azerbaijan, killing two crew members, the Russian defence ministry said on the afternoon of November 9, as reported by Tass news agency.

A third serviceman was reportedly injured and taken to hospital. 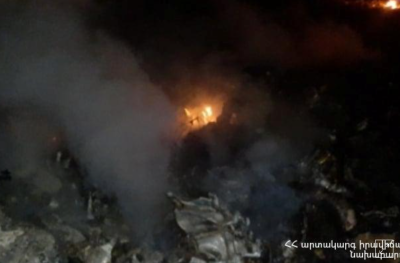 Photo released by Ministry of Emergency Situations of Armenia said to show crash site following the downing of the Russian military Mi-24 helicopter.

A "Manpads" shoulder-launched missile brought it down, the report said.

The Moscow correspondent for The Independent wrote on Twitter that Azerbaijan had accepted responsibility for bringing the helicopter down, adding: “Says it was accidental, a nighttime flight near to border, Russian helicopters not seen in area before. And, erm, sorry. We’ll see how Moscow responds.”

News agencies later carried a statement from Azerbaijan's foreign ministry, reading: "The Azerbaijani side offers an apology to the Russian side in connection with this tragic incident." The statement added that the attack was "not aimed against" Moscow. It offered to pay compensation.

Armenia’s emergency ministry stated that the helicopter crashed to the ground near the village of Yeraskh, which is in southern Armenia near the border with Azerbaijan and far from the fighting in the contested region of Nagorno-Karabakh. The attack appeared to come from across the border in the Azerbaijani-held Nakhchivan exclave.

Fighting has been raging in and around Armenian-held Nagorno-Karabakh since September 27. Armenia claims Turkish military advisers have been instrumental in waging Azerbaijan’s offensive. Baku denies it. Russia has a security pact with Armenia, but has stayed out of the fighting, pointing out that Nagorno-Karabakh—as a territory controlled by ethnic Armenians but still internationally recognised as part of Azerbaijan—is not covered by the agreement. However, Moscow has said it would provide appropriate support should Azerbaijan attack Armenia proper.

Also on November 9, Azerbaijan released its first evidence that it had taken the city of Shusha (a mountain citadel called Shushi in Armenian), including a short video showing Azerbaijani troops raising a flag over the city administration.

An official in the Nagorno-Karabakh administration confirmed it had lost control over Shusha and warned that an Azerbaijani offensive was close to Stepanakert, the city ethnic Armenians regard as the capital of their self-proclaimed republic. “Shushi is entirely outside of our control,” Vahram Poghosyan, the spokesman for the Nagorno-Karabakh administration, wrote on Facebook.

However, other local and Armenian officials denied that Shusha had been taken and Armenian Prime Minister Nikol Pashinian said that the “battle for the city of Shushi is continuing.”

“The [Nagorno Karabakh] defense army and militia are firmly standing on their native soil, and we will continue fighting against the enemy till the end,” he said.

Following war with Armenia, Azerbaijan gains control of lucrative gold mines
CAUCASUS BLOG : What can Biden offer the Caucasus and Stans, all but forgotten about by Trump?
Armenia ‘to extend life of its 1970s Metsamor nuclear power plant after 2026’