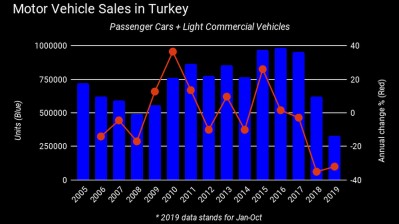 Auto sales in Turkey leapt by 127.5% y/y to 49,000 units in October, after rising 82% on an annual basis in the previous month, according to data from the Turkish Automotive Distributors’ Association (ODD).

Even though the October reading reflects the base effect, local lenders’ moves to cut borrowing costs of late—vehicle loan rates fell to 0.49-0.69% from the 1.40%s in October—have also contributed to the sharp rise in sales. Turkey’s central bank is now expected to slash its policy rate further with the country’s level of annual inflation on November 4 hitting a three-year low of 8.55% in October. That may boost car sales further.

The ODD also reported that in October passenger car sales, which grew 101% y/y in September, jumped 138% on an annual basis to 40,000 units.

Despite the strong sales performance recorded over the past two months, total auto sales were still 32% lower in the first 10 months of 2019 year on year.