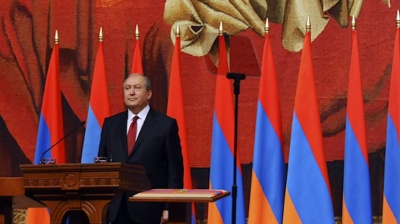 President Sarkissian had clashed publicly with Prime Minister Nikol Pashinyan in late 2020 following the defeat in that year’s Karabakh war.
By Neil Hauer in Yerevan January 23, 2022

Armenia’s President Armen Sarkissian has resigned, according to a statement shared by his press service.

In the statement, Sarkissian states that he is resigning because “the president does not have the necessary tools to influence the radical processes of domestic and foreign policy in these difficult times for the country and the nation. At this difficult time for our state, when national unity is needed, the presidential institution should not be the target of gossip and conspiracy theories, thus diverting public attention from the most important issues”.

Armenia’s president went on to say that “[t]oday, more than ever, we need meaningful, well-thought-out, thoughtful, meaningful action. Otherwise, we, the Armenians of the whole world, will not achieve the goal of our mission, we will find ourselves in the margins of history.” He finished his statement with “special gratitude to our citizens, our compatriots in the diaspora, for their perseverance, endurance, patience and courage in these difficult times for the country.”

Sarkissian had clashed publicly with Prime Minister Nikol Pashinyan in late 2020 following the defeat in that year’s Karabakh war and over the dismissal of top military officers, but had stayed on as president until now. Sarkissian had appeared frustrated by his lack of influence and the way he was left out of key negotiations.

Sarkissian had served in Armenia’s largely ceremonial president role for nearly four years, being one of the few senior figures in government who preceded the 2018 Velvet Revolution that brought Pashinyan to power. There is speculation that he will be replaced by Edmon Marukyan, a human rights activist and leader of the liberal Bright Armenia Party, which failed to be re-elected to parliament at last year's general election.