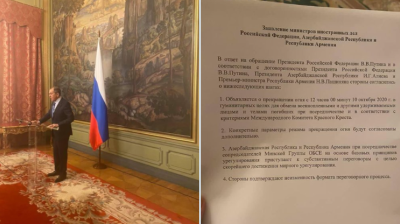 Russian foreign minister Sergey Lavrov announcing the ceasfire, the text of which is seen on the right.
By bne IntelIiNews October 10, 2020

Armenia and Azerbaijan in the early hours of October 10 agreed a temporary ceasefire in the conflict over the disputed Nagorno-Karabakh region.

Thank goodness. A cease-fire has been agreed to by #Armenia and #Azerbaijan. #Nagornokarabakh #NKPeace https://t.co/g5UeWqhVbE

Thank goodness. A cease-fire has been agreed to by #Armenia and #Azerbaijan. #Nagornokarabakh #NKPeace https://t.co/g5UeWqhVbE

Russian Foreign Minister Sergey Lavrov announced the agreement just before 03:00 Moscow time after 10 hours of talks in the Russian capital. The ceasefire was agreed on humanitarian grounds and the two countries would now begin "substantive" talks, he said, adding that the International Committee of the Red Cross would help make the truce work.

Hostilities were to be halted from 08:00 GMT on October 10. There was to be an exchange of prisoners and the recovery of dead bodies.

The specific terms of the ceasefire still needed to be agreed, said Lavrov. The substantive talks would be held under the auspices of the Organization for Security and Co-operation in Europe’s (OSCE) Minsk Group, he added.

Armenian Foreign Minister Zohrab Mnatsakanyan and his Azerbaijani counterpart Jeyhun Bayramov did not speak to reporters in Moscow after striking the ceasefire deal, Reuters reported. But Mnatsakanyan later paid tribute on Armenian state TV to Russian President Vladimir Putin, whom he said played a key role in making sure the talks happened and personally intervened to help get an agreement.

Turkey has aggressively backed Azerbaijan in the conflict, though it has denied sending Baku military advisers, fighter planes, Syrian militia mercenaries and armed drones, as alleged by Armenia. Before the talks, Ankara was highly sceptical of the merits of a ceasefire being introduced without any Armenian withdrawal from the disputed territory first. But after the temporary truce was announced, the Turkish foreign ministry welcomed the deal, saying: “The humanitarian ceasefire is a significant first step but will not stand for a lasting solution.”

It added: “Turkey emphasised that it will support any solution approved by Azerbaijan. Turkey will continue to stand by Azerbaijan in the field and at the table”.

France welcomed the ceasefire, but noted it now had to be fully implemented. “It must now be implemented and strictly observed in order to create the conditions for a permanent cessation of hostilities between the two countries,” French Foreign Ministry spokeswoman Agnes von der Muhll said in a statement. “Substantial discussions, to which the parties have engaged under the aegis of the co-chairs of the Minsk group, must resume without preconditions.”

More than 300 people are known to have died while thousands have been displaced since on September 27 the worst fighting in the long-running conflict over the mountainous enclave since the 1988-1994 Nagorno-Karabakh War broke out. The final casualty figures could turn out to be a lot higher, analysts say.

Nagorno-Karabakh is run as a self-proclaimed republic by ethnic Armenians but it is internationally recognised as part of Azerbaijan.

The two former Soviet republics blamed each other for the outbreak of violence.

Russia has a military base in Armenia and both countries are members of the Collective Security Treaty Organization (CSTO) in which an attack on one member can mean the other members coming to its defence. But as Nagorno-Karabakh is not part of Armenia, the CSTO arrangement has not applied in this conflict. Nevertheless there has been a clear danger of the fighting turning into an all-out war between Armenia and Azerbaijan.

The fighting has displaced half of Nagorno-Karabakh's population of around 147,000 people, officials of the territory have said.

Both sides have accused the other of indiscriminate shelling.