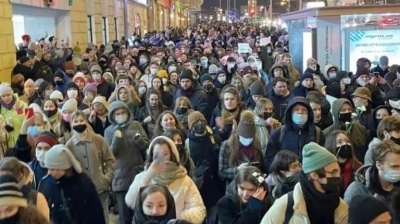 UPDATE: Since this piece was published fresh reports say that over 1,700 people were arrested at anti-war protests in over 50 cities and towns across Russia on February 24, according to OVD-Info, a Russia-based human rights organization that monitors political persecution in the country.

Russian police arrested 167 people at anti-war protests that were organised in 24 Russian cities the same day as a Kremlin-ordered attack on Ukraine began on February 24.

Recent opinion polls have shown that while the vast majority (c85%) Russians supported, and still support, the annexation of Crimea in 2014, they are a lot more ambiguous about attacking Ukraine, with only 25% supporting hypothetical military action against the country.

Two of the biggest protests were in Moscow and St Petersburg, but police quickly moved in and started arresting demonstrators at what was dubbed a “treasonous” meeting.

One prominent Russian opposition activist who called for anti-war protests online told Reuters that she had been detained by police as soon as she emerged from her home.

"I was detained on my way out of the house," Marina Litvinovich, the Moscow-based activist, wrote on Telegram. She confirmed her detention separately in a message to Reuters. Litvinovich was one of many that called for demonstrations the same day as the attacks began.

There were similar scenes in St Petersburg, where hundreds of people gathered in the centre of the city. Police arrived immediately arrived and started removing demonstrators by bus.

“Quite a crowd of anti-war protesters outside the Great Gostiny Dvor in St. Petersburg. Police have reportedly arrested more than 180 people, but there are many more left standing,” Kevin Rothrock, an editor with Meduza, said in a tweet.

Many of the protesters in Moscow and St Petersburg were young and born into Putin’s Russia, but have no memory of the Soviet Union nor the hardships of the 1990s. They are generally more westernised and liberal in their views.

In one of the more poignant protests, Oxxxymiron, one of Russia’s most popular rappers, called for an anti-war movement to be created in Russia. “This is a crime and a catastrophe,” he said, adding that he will cancel his six sold-out concerts in Moscow and St. Petersburg, in protest against the attack on Ukraine.

A Russian anti-war demonstrator in Tbilisi holds a sign apologising for the invasion of Ukraine.

Russia denies defaulting on $100mn bond coupon payment
5 hours ago
A maze of smuggler tunnels: the Kyrgyzstan-Uzbekistan border
6 hours ago
Ukraine's Zelenskiy calls on the US to recognise Russia as a state sponsor of terrorism
7 hours ago
Amnesty International issues damning report on Lithuania’s migration centres
7 hours ago
At least a dozen killed in shopping mall bombing as Zelenskiy urges G7 leaders to impose more sanctions
7 hours ago