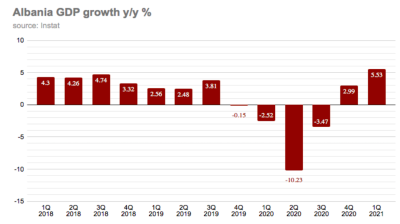 Albania’s GDP rose by a robust 5.53% in year-on-year terms in the first quarter of 2021, the statistics office, Instat, said.

Despite its large tourism sector, Albania has weathered the coronacrisis better than expected. Growth in the first quarter of this year was primarily driven by the industrial and construction sectors, partly as a result of continued reconstruction after the 2019 earthquake.

In the first quarter, the biggest drivers behind the GDP growth were industry, electricity and water, contributing 2.56 percentage points (pp), construction (1.09 pp), public administration, education and health (0.97 pp) and real estate activity (0.58 pp). Several other sectors made smaller contributions to the overall growth.

However, there were small y/y declines in professional and administrative services, which edged the total down by 0.20 pp, and trade, transport, accommodation and food services (-0.14 pp).

On the expenditure side, the important household final consumption component increased by 1.49% y/y. General government consumption was up by 5.16% and gross fixed capital formation by a strong 21.11%. Exports of goods and services were up 0.66%, a considerably smaller rise than the gain in imports of 7.55%.

The European Bank for Reconstruction and Development (EBRD) forecasts that its economy will grow by 4.5% this year. In 2021, the EBRD said, "The planned large public investment programme, including continued reconstruction activities from the earthquake, should also boost domestic demand, and goods exports are picking up strongly. The economy is expected to grow further at 4% in 2022. These forecasts assume that there will be no resurgence of the pandemic; downside risks include the extent of recovery of tourism during the post-pandemic phase."

The IMF previously noted that the recovery is underway in Albania, forecasting 5.3% growth this year. However, an IMF official called on Albania to scale back the "overly ambitious domestically financed public investment to protect priority spending on social protection, healthcare (notably vaccination) and earthquake reconstruction and to increase contingency buffers."

Bulgaria’s central bank revises up 2021 economic growth forecast to 4.1%
4 hours ago
Average gross wage in Slovenia up by a real 3.9% y/y in May
2 days ago
Polish retail sales ease growth to 8.6% y/y in June
2 days ago
Natural disasters caused €80mn of damage to Croatian agriculture in 2021
3 days ago
Poland’s industrial production eases growth in June
3 days ago