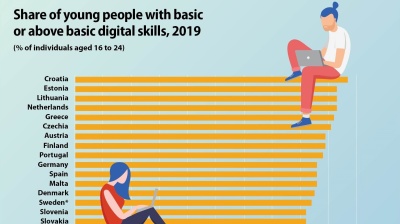 Young Croatian adults were the most likely in the European Union to have basic or above basic digital skills, a compilation of data from Eurostat showed.

Over 95% of Croatians aged 16-24 had at least basic digital skills, better than any other EU country, even e-government pioneer Estonia which held second place, and comparable only to non-EU countries Iceland and Norway.

More than 90% of young people also had at least basic digital skills in Czechia, Greece, Lithuania and the Netherlands, as well as non-EU countries Sweden and the UK.

At the other end of the scale, young people from Bulgaria and Romania were least likely to have at least basic digital skills.

Eurostat lists a range of activities as basic digital skills, including finding information about goods or services online, making phone or video calls over the internet, participating in social networks and installing software or applications.

“Over recent months, many young people (aged 16-24) have had to follow online classes, as lockdown measures associated with the COVID-19 pandemic have prevented their schools, universities or other vocational and training institutions from running face-to-face teaching,” said Eurostat in a press release.

Southeast Europeans most likely in EU to believe corruption is getting worse
International banking groups look to expand in Central and Southeast Europe despite pandemic
COMMENT: Time to end Putin's impunity

In late May Russian insuretech leader BestDoctor closed a $26mn round with an impressive investor consortium. The money was brought in by Winter Capital, a Moscow-based international fund backed, in particular, by billionaire Vladimir Potanin.