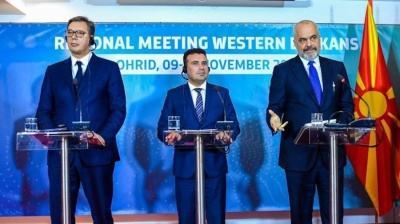 The Western Balkans countries are divided over the regional integration project dubbed “mini Schengen” that was agreed by the leaders of Albania, North Macedonia and Serbia earlier this month.

The three countries agreed on November 9 to take concrete steps to eliminate obstacles to the free movement of people, goods, services and capital, with the final aim of securing EU membership.

However, the remaining three Western Balkans countries, Bosnia & Herzegovina, Kosovo and Montenegro, have so far declined to join the initiative.

The initiative was agreed following the EU summit in October at which France blocked Tirana and Skopje from starting EU accession talks. The setback for its neighbours also raised concerns in Serbia, which opened EU membership talks in 2014, but has normalise its relations with Kosovo as a pre-condition for joining the bloc.

Both Montenegro and Kosovo have expressed concerns that joining would conflict with their desire to join the EU. Bosnia that it is oriented towards membership in the EU and Nato, and would need further information before deciding whether to join.

This lack of will from the three states to join the initiative provoked criticism from Albanian Prime Minister Edi Rama.

International analysts from the International Institute for Middle-East and Balkan Studies (IFIMES) believe the initiative would bring the region only positive effects, including in their EU membership aspirations.

Moreover, freedom of movement would positively affect the six countries, increasing their competitiveness on the market with 20 million inhabitants. The World Bank and the IMF have estimated that this would help the region to achieve at least 3-4% economic growth as soon as next year.

“The visionary initiative put forward by three West Balkan states – Serbia, North Macedonia and Albania – is vital for the whole region, therefore other countries are expected to join it soon,” IFIMES noted.

The cooperation would ease the political relations between the countries, which have long-lasting issues to resolve.

“Great pressure is therefore felt from the business community and citizens in the region, who expect their states to join the initiative and ensure its soon implementation,” the report reads.

The six countries would also benefit from the opportunity to travel only with ID cards as this would increase the workforce accessibility, which would make the region more attractive for investments.

Of all the states in the region, North Macedonia is seen as benefitting the most from the initiative, followed by Albania and Serbia.

Meanwhile, there is strong opposition to the project within the region. IFIMES’ report argues the ruling parties in Montenegro and Kosovo would benefit from rising tensions and conflicts rather than from cooperation, as crises help them remain in power.

On top of that, it claims, some media in Serbia receive significant sums to present the country as an unstable and unreliable partner to the West. Earlier reports, for example a 2018 report prepared for the US Senate’s foreign relations committee, have warned of Russian soft power in the region, including through influence over media in Serbia and other countries.

“There are serious reasons for concern: large amounts of money and a well-paid media network have been deployed to discredit the initiative by presenting it as [Serbian President Aleksandar] Vucic’s idea to realise the Greater Serbia project. Certain government-related intelligence and criminal structures in Montenegro, Albania and Kosovo as well as some parts of the international community from the East and the West will spare no effort to stop the formation of mini-Schengen area and to create instability and crises, especially in Serbia, in order to illegally change the government in that country,” the report noted.