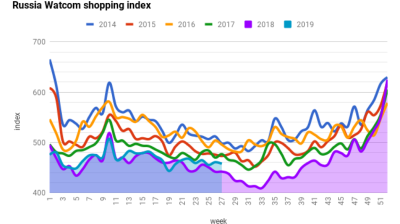 Foot traffic at Russia’s leading malls was up over the first six months of this year and suggests the continuous contraction that has marred retail for the last five years has bottomed out, according to the latest Watcom Shopping index.

“During the first half of the year the Shopping Index in Russia showed growth of 2.2% with the growth in the leading malls of Moscow and St Petersburg at 1% and 1.4% respectively. From the major urabn centers the fastest growth was seen in Yekaterinburg where shopping traffic was up 2.7% over the first six months of this year compared to a year earlier,” Watcom CEO Yuri Skorokhodov said in a press release. “We can state that the negative trend has been broken. People got used to a new reality.”

The Watcom index measures foot traffic at the leading malls in Russia in real time by using security cameras and face recognition technology and is the most accurate measure of activity in the top retailing outlets.

Foot traffic has been falling continuously since 2014 and mirrors the decline in real incomes over the same period. The fall has also been exacerbated by the growing share of e-commerce which now accounts for 4.5% of total retail turnover and is growing exponentially.

Skorokhodov added: “Despite the fact that the Russians got sick and tired of crisis and negative news about economics, we can confirm that consumer sentiment has stabilised due to the lack of ruble volatility and deferred demand.”

Russia’s economic growth has been almost entirely supported by consumption in the first half of this year, although the Central Bank of Russia (CBR) is worried as much of this consumption was paid for by consumer credit. Consumer credits have been growing by 25% y/y at an annualised rate, whereas real incomes have expanded by about 7%.

“Real wages increased +2.3% y/y in June, against a revised +1.6% y/y in May. Mild but robust growth in real wages underpinned demand, despite the fact the dominating narrative focuses on the expansion of retail lending as the key (if not the sole) supporting factor for domestic consumption growth,” Alexander Isakov, chief economist with VTB, said in a recent note. “Real disposable income in 1H19 dropped -1.3% y/y in 1H19 and declined -0.2% y/y in 2Q19 in particular, according to Rosstat.”

That mild increase in incomes has push up retail sales, which grew +1.4% y/y in June. The dynamics in food and non-food retail sales were synchronised: the former increased +1.4% y/y, the latter rose by +1.5% y/y, VTB reports.

The outlook for this year is real income growth will remain flat but economic growth should pick up as the state’s RUB27 trillion spending programme starts to make itself felt later this year.

Russia’s CBR reserves down $43.7bn since the start of the war
17 hours ago
Industrial inflation exceeds 25% y/y in Moldova
19 hours ago
Romania’s construction companies post robust 6.5% growth in Q1
19 hours ago
Russians trade TV news for social media as war-weariness sets in
1 day ago
Net FDI in Bulgaria jumps four times y/y through March to €1.05bn
2 days ago