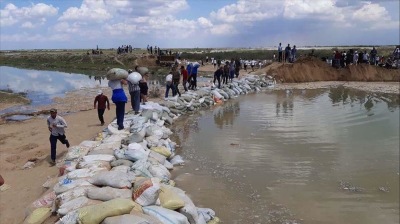 Uzbek-born businessman and philanthropist Alisher Usmanov donated $15mn to help those affected by the busting of Uzbekistan's Sardoba dam / wiki
By Ben Aris in Berlin May 7, 2020

Uzbek-born businessman and philanthropist Alisher Usmanov donated $15mn to help those affected by the busting of the Sardoba dam last week that had destroyed dozens of villages and had displaced a total of around 100,000 people from their homes.

Torrential rain caused the wall of the dam on the Syr Darya river to collapse on May 1 sending a flood of water out over the river basin, as bne IntelliNews reported at the time including some dramatic video posted on social media showing the moments after the containing wall came down.

Usmanov gifted $15mn to help in the relief effort for the families affected in the Sardoba dam tragedy: $10mn for Uzbekistan and $5mn for Kazakhstan, Usmanov’s press service confirmed to bne IntelliNews.

The dam burst after a gale brought heavy rain on the morning of May 1.

Uzbekistan took the brunt of the flood. An estimated 90,000 people were ordered to leave from 24 villages in the Sardobinsky, Akaltynsky and Mirzaabad districts of the Syrdarya region in Uzbekistan to safe areas.

In Kazakhstan, more than a dozen villages were flooded in the Maktaral district of the Turkestan region. In total, more than 100,000 people were evacuated in both countries.

This is the second humanitarian donation Usmanov has made to Uzbekistan this year. In March and in April he allocated a total of $25mn to the Central Asian republic to fight the COVID-19 infection. The funds were transferred to the Charity and Health of Uzbekistan Public Fund (Mehr-Shafqat va Salomatlik). The fund was created to provide financial assistance to the government of Uzbekistan in the fight against the pandemic.

The Russian Usmanov remains keenly interested in Uzbekistan, which is opening up to the rest of the world following the death of its first president Islam Karimov in 2016. Last year he donated “several hundred million dollars” to Uzbekistan’s cultural and social welfare projects, he told the Financial Times in a recent interview.