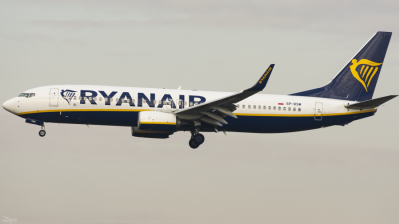 Ryanair aircraft similar to the plane forced to land at Minsk in May 2021
By bne IntelliNews July 20, 2022

In a press release on July 19, the council of UN’s civil aviation agency (ICAO) concluded that senior Belarusian government officials gave direct instructions to communicate false information about a bomb threat to Ryanair Flight FR4978 in May last year.

On May 23, 2021, the Ryanair Flight FR4978 landed in Minsk after Belarus sent a military jet to escort the flight while the control tower from Minsk International Airport told the pilots that there was a bomb on board.

After the plane had landed, Belarus’ Interior Ministry’s special forces arrested Belarusian journalist and dissident Roman Pratasevich along with his girlfriend Sofia Sapega.

Pratasevich has since appeared in multiple propaganda videos by Belarusian security forces, condemning the exiled opposition and confessing his guilt. In May this year, Sapega was sentenced to six years in prison, and shortly afterwards appealed to Belarusian strongman Alexander Lukashenko for a pardon.

Western countries condemned the action and accused Lukashenko of “state-sponsored hijacking” to capture a dissident. As the plane was a civilian passenger plane going from Athens to Vilnius, many EU countries also pointed out that this move endangered the lives of citizens from multiple EU countries.

Shortly after the event, the EU, the UK and the US closed their skies to Belarusian aircraft, and also told their own countries’ airlines to completely avoid Belarusian airspace. Since then, Belarus’ Air Navigation Services have also come under financial sanctions from all Western countries.

Belarusian government officials in turn condemned Western countries for acting too rashly without even waiting for the results of an official investigation by the ICAO. However, as the ICAO investigation dragged on, it became increasingly apparent that the result of the report would not turn out in Belarus’ favour.

Already on January 17, the ICAO published a report saying that the Belarusian authorities had not followed proper regulations in contacting the aircraft, that the bomb threat had been deliberately false (although it was not specified who was behind it) and added that it was unsatisfied with the information given by Belarusian authorities.

In the ICAO’s latest report, following new information received on the case, senior Belarusian officials are pointed out as being behind the false bomb threat and accused of “committing an act of unlawful interference.”

Russia and Belarus’ representatives expressed strong objections to the ICAO’s decision to point out Belarus as the guilty party and called out inaccuracies and non-objective approaches in the report.

Meanwhile, the rest of the council expressed appreciation for the ICAO’s efforts to conduct a comprehensive analysis and reiterated that this constituted an offence against both the Montreal and Chicago conventions.

On its 41st Session between 27 September and 7 October 2022, the ICAO Assembly will discuss possible infractions by Belarus of the Chicago Convention. Furthermore, the report has been forwarded to the United Nations Secretary-General Antonio Guterres “for consideration and any appropriate action.”

Ultimately, the West’s “rash” actions turned out to be well-founded, and the Belarusian authorities were most likely only trying to delay sanctions on its airspace and aircraft industry and quieten down the event by referring to the need for a comprehensive report by the ICAO.

The ICAO’s decision causes another rift in Belarus' relationship with the UN. However, instead of calming down matters, the Belarusian authorities’ efforts to push for this report has only led to it being discussed further, and more international condemnations of Belarus’ actions can be expected this year.