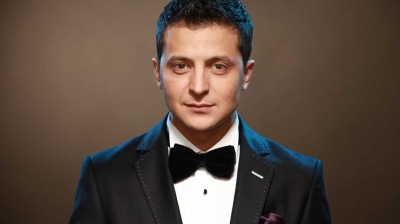 Volodymyr Zelenskiy, the comedian-actor turned presidential competitor and number two in the polls, was shown to have active business in Russia, despite his previous claim that he exited the businesses in 2014
By bne IntelliNews January 22, 2019

Volodymyr Zelenskiy, the comedian-actor turned presidential competitor and number two in the polls, was shown to have active business in Russia, despite his previous claim that he exited the businesses in 2014 the Skhemy news program produced by Radio Free Europe/Radio Liberty reported on January 17.

Zelenskiy is a shareholder in Green Family Ltd., a Cyrpus-based firm that operates three companies in Russia involved in the production of film, video and television programs. These companies earned revenue between 2014 and 2017, according to the company’s filings. The Green Films subsidiary has also gained financing for films from the Russian government.

Zelenskiy said in an interview in late December that he produced his last film with his Russian partners in 2012, which was released in 2014. “Everything ended with mutual ‘sympathies’,” he said, referring to the Russians. He added, “We had an office in Moscow. That all was until 2014. We closed our business, which brought in a lot.”

In response to the RFE/RL report, Zelenskiy said in a January 18 video that neither he, nor his company has conducted business in Russia “after what Russia did to Ukraine.”

He doesn’t travel to Russia because a criminal case has been opened against him for financing the Ukrainian army. At the same time, Zelenskiy acknowledged that his company trades in intellectual rights on his formats, ideas and scripts with 21 countries and “all the CIS countries,” implying Russia.

Then in an interview with the pravda.com.ua news site published on January 21, Zelenskiy said he will exit the Cyprus-based holding Green Family that controls the Green Films subsidiary that produces films in Russia. He acknowledged that he continues to receive royalties from Russia from work produced before 2014, such as television series.

The RFE/RL report also confirmed Zelenskiy’s ties to billionaire oligarch Igor Kolomoisky. Among the partners in Green Family Ltd. is Timur Mindich, who is identified as a Kolomoisky business partner. The RFE/RL footage also revealed that Zelenskiy is escorted by a Volkswagen minivan that belongs to a firm that is part of the Privat Group business empire controlled by Kolomoisky, the bihus.info news site reported on January 18.

“It’s no surprise that Zelenskiy has had business in Russia, as most Ukrainian businessmen do, whether directly or indirectly. But for someone promoting himself as having a fresh and honest approach, Zelenskiy looks like a standard politician, having made misleading statements about his own Russia ties and then having to squirm his way out of a scandal that he created with his own statements,” Zenon Zawada of Concorde Capital said in a note.

“With his ties to Kolomoisky confirmed, Zelenskiy can also be discredited by his rivals as a standard politician who is merely pursuing office to serve the interests of an oligarch. As we expected, we believe his popularity will continue to wane as journalists increasingly expose his laundry, and as he continues to reveal his lack of depth on critical matters of national security and defence. We continue to believe the second-round runoff in late April will be between Petro Poroshenko and Yulia Tymoshenko,” Zawada added.