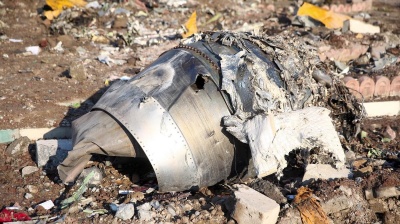 Details from Kyiv’s investigation into Iran’s downing of Ukraine International Airlines flight (UIA) PS752 just outside Tehran in early January show a second missile hit the aircraft 29 seconds after the first, and Ukrainian officials are concerned by what the time difference could indicate, RBC reported on March 5.

“We don’t like the fact that the second missile launched at our plane was sent not at the 3rd second as [might be expected], but at the 29th,” Ukrainian National Security and Defence Council secretary Alexei Danilov reportedly said.

He added: “This is very confusing to us, so studying this is a fundamental part of this investigation for us.”

Iranian officials have previously suggested that a communications breakdown meant that the gunner who fired on the plane after misidentifying it as a hostile object was put in a situation where he had to alone decide on whether to launch missiles, with no consultation possible with superior officers.

The investigation into the tragedy in which 167 people lost their lives is being conducted in Iran, but “with the obligatory participation of the Ukrainian side”, Danilov said.

He added that in the near future an Iranian delegation would come to Ukraine to agree on further technical aspects of the investigation. Iran has yet to surrender the two black box flight recorders recovered from the wreckage of the UIA aircraft.

On March 4, Canada’s Foreign Minister Francois-Philippe Champagne, speaking at a press conference with his Ukrainian counterpart in relation to the Canadian victims of the tragedy, said: “We do expect, and we demand... from Iran access to the black boxes without any further delay.”

Champagne demanded to know why the Islamic Republic was not handing over the black boxes. “We hope that Iran will choose the way of transparency,” he added.

The General Staff of the Armed Forces of Iran on January 11 admitted that the plane was mistakenly shot down by an Iranian air defence unit. The Iranian military has emphasised that the plane was flying close to an important military installation and in shape and altitude could be taken as resembling an enemy target.

‘Alleged arms dealer was aboard’

One of those named as having been aboard the Boeing 737-800 is Onela Malakhova, a Ukrainian businesswoman who ran two companies cited in a UN report for having links to shadowy arms deals in Libya.

Malakhova was since August 2018 registered at Companies House, the UK’s official registry of businesses, as one of two beneficial owners of Volaris. In several UN reports, Volaris was referred to as having exported weapons disguised as car parts from Turkey to Libya’s Tripoli-based Government of National Accord, according to a CNN report.

It is not known what Malakhova was doing in Tehran.