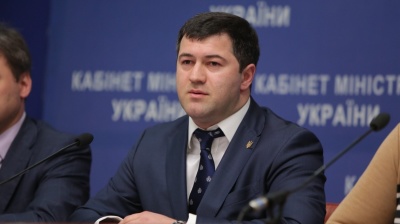 The former head of the State Fiscal Service of Ukraine Roman Nasirov has not only not been prosecuted for corruption, but now plans to run for the Ukrainian presidency in 2019.

"Every day I think about this [participation in the presidential elections] more and more. I have already begun to prepare for this. I think that, probably, yes," Nasirov said on the 112 Ukraine television channel, reports Interfax.

Nasirov was arrested in March 2017 on corruption charges brought by the National Anti-Corruption Bureau of Ukraine (NABU) in what was widely hailed as the “first big fish” to be netted by the new anti-graft agency. Nasirov was arraigned in a court house that was surrounded by protestors who ringed the building to make sure he could not leave before judges came to work on the following Monday to formalised the indictment.

He was released on a bail of UAH100mn ($3.5mn) posted by his wife and was supposed to go on trial in August last year. However, while the case came close to being heard, nothing has happened.

As bne IntelliNews columnist Kateryna Kruk said in an op-ed at the time, the Ukrainian justice system was on trial in what was widely seen as a litmus test for the justice system and NABU’s ability to bring the political elite to book – a test the system has now apparently failed.

Under Ukrainian law it appears that being under investigation for corruption does not preclude you from running for high office.

Asked if he will run in the spring 2019 elections during the TV interview, Nasirov said: "We will wait until it is announced that we have elections, when they announce registration."

Nasirov is accused of committing a crime pursuant to Part 2 of Article 364 (embezzlement) of Ukraine's Criminal Code worth several tens of millions of dollars. Investigators believe that Nasirov in 2015-2016, acting in the interests of MP Oleksandr Onyshchenko, took a number of groundless decisions, which resulted in damage to the state worth UAH2bn.