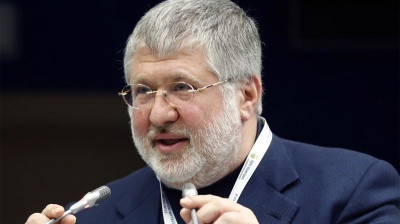 Ukrainian oligarch Ihor Kolomoisky wants the $2bn of capital in Privatbank at the time of its nationalisation back / wiki
By bne IntelliNews April 8, 2019

Ihor Kolomoisky, Ukraine's oligarch and former co-owner of the nation's largest lender PrivatBank, is going to seek $2bn of compensation from the nation's government for illegal nationalisation of the lender in late 2016.

"I don't need [to get back] PrivatBank. But there was $2bn in capital there. Let them [the Ukrainian government] return it to me and there will be no problems," Kolomoisky said in an interview with the Ekonomichna Pravda online outlet on April 8.

The statement followed March's tweet of the United States (US) embassy to Ukraine that its diplomats "are closely monitoring" developments surrounding PrivatBank. "Its nationalisation was a milestone in economic reform and the fight against corruption," the US embassy said on its official Twitter page, without providing any other details.

"As long as Poroshenko [is President], there can be no fair trial in Ukraine," the businessman added. "And not only on my case. I am not in a hurry. For me, this is not a life-or-death issue. It's not about money, but the principle of the matter."

Many experts and journalists in Kyiv are speculating that Ukrainian comic and presidential candidate Volodymyr Zelenskiy, a close associate of Kolomoisky, is ready to de-nationalise the lender. The government nationalised PrivatBank, co-owned by Kolomoisky, in December 2016 after it failed to fulfil a three-year recapitalisation plan.

Over the past years, Kolomoisky and another the bank's co-owner, Hennadiy Bogolyubov, have successfully defended against Kyiv's legal attempts to recover the loses costs.

Specifically, in November 2018, a London court concluded that it does not have jurisdiction over Ukraine's claims against the businessmen, who were challenging the applicability of jurisdiction of the High Court of Justice in London.

In December 2017, the same court ruled to freeze worldwide assets of the former owners, including six companies controlled by Kolomoisky and his partner Bogolyubov, worth more than $2.5bn. The court also established a weekly limit of £20,000 on Kolomoisky’s personal expenses.