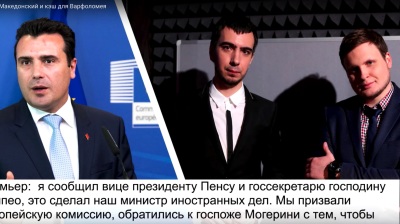 North Macedonia’s Prime Minister Zoran Zaev admitted on July 9 that he was deceived by the two Russian pranksters, but rejected opposition calls to resign for being tricked.

Pretending to be Ukraine's former president Petro Poroshenko, Russians comedians Vladimir "Vovan" Kuznetsov and Alexei "Lexus" Stolyarov called Zaev in August 2018, as well as in January and April 2019. A 54-minute audio recording of phone calls with Zaev, who was speaking English, was released on YouTube on July 9.

The Russian duo regularly make prank calls targeting mainly politicians who are considered as opponents to the Russian policy both in the country and abroad.

In one part of the conversation “Poroshenko" offered Zaev to help Macedonia in mediation process for gaining independence of the Macedonian Orthodox Church with the highest Orthodox authority, the Orthodox Patriarch Bartholomew.

Zaev was advised to pay a "donation" to the patriarch of €100,000 to speed up the procedure, to which he agreed.

“I personally gave Bartholomew money. In my case, I paid €150,000, it is cheaper for you," the prankster said.

Zaev immediately held a news conference following the release of the audio recording. “Unfortunately, I have become one of those who in the past few years have been deceived by a well-organized structure,” Zaev said at a news conference.

Prime Minister claimed that these structures benefit from new tools and tactics to influence media and discredit politicians and countries with Euro-Atlantic aspirations.

“This is one of the attempts to directly harm our strategic interests to complete the process for our Nato membership,” Zaev said.

North Macedonia signed a Nato accession protocol in February and is waiting for all member countries to ratify the deal that will enable tiny Balkan country to become 30th Nato member at the end of 2019.

Russia is trying to spread its influence in the Balkan countries and hamper their attempts to join Nato. It was also against the change of the country's name Macedonia to North Macedonia earlier this year.

Zaev blamed that in some parts of the phone calls, the two Russian pranksters made serious interventions which lead to false conclusions.

"This is a new alarm for us and for the entire democratic world, which requires a strong and determined fight against false news and manipulations,” Zaev said.

He announced that the government will soon come up with an emergency plan for taking decisive action against the campaign for spreading misinformation.

Asked by journalists about the audio recording, the leader of the opposition VMRO-DPMNE Hristijan Mickoski said that Zaev should resign following such humiliation.

“I think that the only apology that Mr. Zaev should been contained in two sentences, I am ashamed of what I did and I will immediately leave my post as prime minister,” Mickoski said.