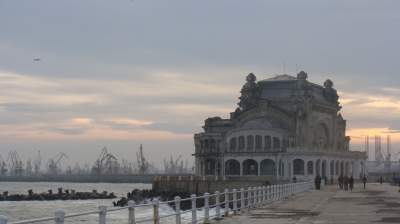 Could the port of Constanta in Romania become a substantial gateway to EU markets for Turkmenistan?
By bne IntelliNews March 13, 2019

The BSCS is a trade route that technically already exists, but it will require sufficient infrastructure development to reach its potential, the report noted. The BSCS serves to link Turkmenistan to the European Union via Romania—under the current torrid economic conditions faced by the Central Asian nation, European markets would be a welcome opportunity for it. The Turkmen presently rely on China to take the majority of their exports. The route could help boost the activities of the port at Turkmenbashi, recently renovated and remodelled for as much as $1.5bn, according to estimates.

Outside of its natural gas exports to China, Turkmenistan normally exports cement, textiles, carpets, wool and fertilisers. Such products might make up the bulk of its exports to the EU in the coming few years, but Turkmenistan would benefit more from exporting petroleum products, including petrol, petroleum coke, ammonia and bitumen. Much of that is produced at the Turkmenbashi refinery complex and Turkmenistan’s new Ovadan-Depe gas-to-liquids plant.

While all of that sounds good on paper, RFE/RL’s report posits that the BSCS is riddled with issues for Turkmenistan. It will go through Azerbaijan's new port at Alat, which is replacing an older port at Baku. But the port is not yet fully operational.

Alat will transfer sea cargo onto rails for the journey through the Caucasus Mountains to ports on Georgia's Black Sea coast. Turkmenistan will be forced to compete with other parties trying to ship their goods, including cargo from Kazakhstan. The Alat railway lines are also connected to Russia and Iran. The obstacles could prevent BSCS from achieving efficiency.

The report also noted that, once through the Caucasus, Turkmen cargo shipments could theoretically go through five Georgian ports that could handle its cargo, but that would largely depend on the goods Turkmenistan wants to export to the EU.

Turkmenistan may not get a chance to export its liquid petroleum products, for example. The only Georgian Black Sea ports that handle liquid cargoes, Batumi and Kulevia, are respectively owned by Kazakhstan’s KazTransOil and Azerbaijan’s Socar. Azerbaijan and Kazakhstan are competitors on the Western petroleum markets.

Among other ports that could potentially handle Turkmen cargo, Georgia's deep sea port at Anaklia is currently under construction. When the work is completed, Anaklia Port on the BlackSea will be able to handle ships with a capacity of up to 10,000 TEUs, and a mix of cargoes including containers, dry bulk and liquid bulk. The port will be built to annually handle some 100mn tonnes of cargo. The first phase of the project is set for completion by 2021, although the volumes are expected to be modest in that year.