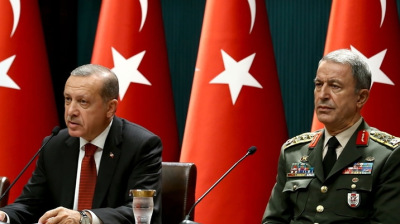 Turkey will use the advanced S-400 missile defence systems it procured from Russia just as other Nato members use S-300 defence systems, Turkish defence minister Hulusi Akar has told members of the parliamentary planning and budget committee, bianet reported on November 12.

The S-300 is the older version of the S-400 series, which Turkey tested for the first time in late October despite continued concern among US senators that by putting it into operation Ankara would be jeopardising the security of certain military hardware used by Nato members. There has been bipartisan agreement among US senators that Turkey should face sanctions over its acquisition of S-400s but US President Donald Trump is widely seen as having shielded Ankara from such a consequence. The Joe Biden White House, due to commence from January 20, is more likely to agree to such sanctions.

"Just as the S-300 system, which exists in some Nato member states, is used in the Nato alliance, the S-400 system will be used [in Turkey] in the same way," Akar reportedly told the committee.

Russia has sold S-300 systems to 20 countries, including Nato member countries such as Bulgaria, Greece, and Slovakia.

Akar also said that Turkey would continue with its S-400 control and preparation process "as planned."

He called on the US to form a joint working group to explore compatibility issues when it comes to the S-400s and F-35 stealth fighter jets. After Turkey went ahead with its S-400 acquisition, the US barred Turkey from receiving F-35s it had ordered.

"We're ready to discuss the technical concerns of the US on the compatibility of S-400s and F-35s," Akar said.

Turkey could be sanctioned under the Countering America's Adversaries Through Sanctions Act (CAATSA).

If Ankara cannot get the block on its F-35 orders removed, it will need to find an alternative fifth generation fighter jet that it can buy. But the F-35 is hailed as the most advanced fighter plane in the world and Turkey is yet to identify an alternative that it would contemplate.

Turkey’s Erdogan administration is still whitewashing the extent of the country’s coronavirus (COVID-19) outbreak despite having released new data that more than tripled the official number of ... more

In terms of infections, Turkey now officially has the worst coronavirus (COVID-19) outbreak in the Middle East, data updated following Ankara’s decision to offer more transparency about the extent ... more