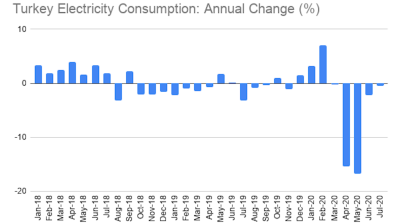 Electricity consumption in Turkey declined in July for the fifth month in a row. It fell 0.5% y/y to 27.2bn kWh but a 21% m/m recovery compared to June was implied, according to energy and natural resources data cited by Hurriyet Daily News on August 2.

Consumption collapsed by 17% y/y to 19.6bn kWh in coronavirus (COVID19)-troubled May after plunging 15% y/y to 19.1bn kWh in April, the lowest level recorded since 2013, according to data from Energy Exchange Istanbul.

Turkey’s industrial production and GDP data, produced by the TUIK, are unfortunately far from reliable, while the Purchasing Managers’ Index (PMI) data compiled by IHS Markit under the sponsorship of the Istanbul Chamber of Commerce should be taken with a generous pinch of salt such are the difficulties of pinning down verifiable information in the Middle East’s largest economy, elusive at the best of times.

This being the case, electricity consumption is often seen as a more reliable indicator when it comes to getting some idea as regards the real level of industrial activity in the country.

Hiding its failures has become “crucial” for the Erdogan administration, according to Marc Pierini, a visiting scholar at the Carnegie Europe think tank. In an ... more

The Turkish lira hit its latest all-time low—of 7.6408 to the dollar—on September 21 against a backdrop in which analysts were predicting that Turkey’s central bank will stick with backdoor ... more