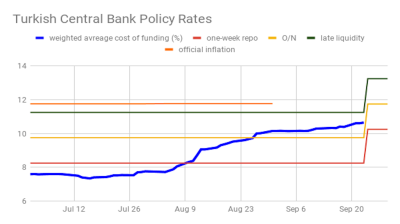 Turkey’s central bank confounded the markets on September 24 by hiking its main policy rate (one-week repo) by 200bp to 10.25% in an unexpected move.

The move also pushed up the overnight lending rate and late liquidity lending rate within the national lender’s “corridor policy” by 200bp to 11.75% and 13.25%, respectively. Official annual inflation stands at 11.7%.

News agencies reported sharp consequent movements in the USD/TRY rate in favour of the Turkish lira, but such reports illogically forget the fact that even the rating agencies presently describe the currency as under a “managed float” given the backdoor interventions made by government-run banks. Prior to the central bank rates announcement, the lira found its latest all-time low of 7.7207 against the dollar. After the announcement, it was quickly up by around 1% but its gains were gradually trimmed and by around 21:45 Istanbul time on September 24 the lira was trading 0.88% stronger at 7.6203.

Life was much easier when the Turkish markets were genuinely markets, but as things stand with this Erdogan administration that entirely bosses the economy, monetary et al, we have to take into account how much of the market reaction is staged by the government’s invisible hand and how much is down to real market dynamics.

“Two policy reversals by #Turkey in 2 days: monetary policy and maritime boundaries [Turkey has toned down the aggression in its dispute with Greece and Cyprus over gas exploration zones]. Shows the extreme risks entailed by outlandish economic concepts and disruptive foreign policy. Let’s see the next steps,” Marc Pierini of Carnegie Europe wrote on Twitter.

Yes, we can add the rate hike to the long list of famous U-turns made by Turkish President Recep Tayyip Erdogan, but it is in actuality not a rate hike.

“More of a ‘catch-up’ rather than taking the initiative to start with a clean sheet,” Emre Akcakmak of EastCapital tweeted.

As of September 23, the central bank’s weighted average cost of funding (WACF) was at 10.65%, 40bp above the new benchmark policy rate. Overall funding stock, excluding USD-TRY swaps, stood at TRY262bn while TRY195bn, or 74%, was provided through traditional repo auctions.

At traditional repo auctions, the rates are set by bank bids and they had already reached 11.42% by September 23.

On September 24, the authority opened a TRY10bn traditional repo auction, as it generally does each day, with a few exceptions made for TRY5bn auctions on some days. The latest auction saw the rate rise further to 11.59%.

When funding via USD-TRY swaps is taken into account, calculating the real funding rate becomes a knottier feat. In the chart below, shared on September 10 by @e507, Haluk Burumcekci of Burumcekci Consulting calculates the overall funding rate, including swaps, at 9.44% as of September 8 versus a WACF of 10.15%.

The lira rates at USD-TRY swap auctions continued to rise in the following days, reaching 10.20% in the 3-month auction held on September 22.

Unlike local analysts such as Tufan Comert of Garanti Securities (as above), Jason Tuvey of Capital Economics was more optimistic following the rate cut, writing in a note: “The move gives the CBRT [Central Bank of the Republic of Turkey] more room to tighten monetary conditions through its interest rate ‘corridor’ and we expect that the average cost of central bank liquidity provision will climb to around 12% by year-end (from 10.7% now).”

Lira supply is slowly declining but supply growth remains at incredible levels versus official CPI inflation stated as just below 12% y/y in August.

“Today’s decision was a major surprise. Nearly all of the analysts polled by Bloomberg prior to the meeting, including ourselves, predicted that the benchmark one-week repo rate would be left on hold at 8.25%. Only three of the 28 analysts expected an interest rate hike, albeit smaller than the one actually delivered,” Tuvey added.

Lira loans growth is stabilising but remains at dizzying levels.

“It’s not clear if raising policy rates will result in an immediate tightening of monetary conditions. After all, the benchmark one-week repo rate, now at 10.25%, is still below the average cost of funding. That said, there is now more scope for the central bank to tighten monetary conditions through the back door, with the late liquidity window – which marks the top of the corridor – now standing at 13.25%,” Tuvey also said.

“Turkey’s monetary policy framework makes it difficult to predict exactly what will happen to monetary conditions going forward. Developments will almost certainly continue to hinge on moves in the lira,” he also noted.

“The real test, of course, is whether the CBRT backs up today’s decision with further steps to improve its policymaking credibility. Additional tightening at the next few meetings, with a pledge to stick to a single policy rate and a commitment to keep real interest rates positive for a prolonged period, would be ideal. Past experience suggests that we shouldn’t hold our breath,” he concluded.

Lira deposit rates have moved into the 13%s but net (accounting for the 15% tax on deposit returns) lira returns are still not positive or encouraging, an unnamed bank treasurer told Reuters, prior to the rate hike.

Russian equity market on hold until US elections pass
16 hours ago
Amid war, Armenians closely watching the signals from Russia
7 days ago
TURKEY INSIGHT: Hospital building consortium latest creditor to go for a high stakes restructuring
9 days ago
Poland, Russia heading for long-running legal dispute over Nord Stream 2
11 days ago
CEE-4 growth pulls ahead of the rest of Europe
14 days ago