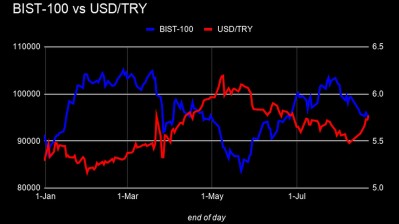 Emerging market investors are declaring a change in sentiment ahead of Fed chairman Jerome Powell’s press briefing to be held on August 23 (at 17:00 Istanbul time) during the Kansas Fed’s traditional economic policy symposium at Jackson Hole, Global Capital reported on August 21 with a story entitled “EM hunt for yield replaced by 'hunt for safety'”.

"We were in a proper hunt for yield… But now, that's moved to a hunt for safety. People are loading up on safe assets," an emerging markets portfolio manager based in London told the publication.


What’s clear to the eye is that the global market sentiment cycles are getting shorter.

Markets are currently pricing Fed rate cuts as high as 100bp in the following one-year period due to ongoing pressure exerted by US President Donald Trump.

If Powell at Jackson Hole strongly stands up for his latest argument of a “mid-cycle adjustment”, the global markets will be getting ready for a tumble. On the other hand, any sign of obeying Trump would make for fresh temporary rallies.

Right on cue, Turkey has started drifting in line with the latest artificial agenda of its president, Recep Tayyip Erdogan.

Erdogan lost some of his aura as a strongman with the reversals he suffered in the late March local elections and Istanbul revote in June—not to mention his botching of the Turkish economy which has also sent the message to ordinary Turks that he’s not the extraordinary leader he’s made himself out to be—but early this week he replaced the pro-Kurdish mayors of three cities in Turkey’s south east—namely Diyarbakir, Van and Mardin—with state officials.

The brittle state of the Turkish economy and fears that the Turkish lira could again come under the cosh—August 22 saw the currency weaken around 1% against the dollar to as far as 5.79, the worst rate seen since early July, as the market continued to digest central bank moves on required reserves aimed at triggering rapid loan growth in the pursuit, say some critics, of short-term political goals—will remain foremost on the minds of most of the electorate, but dicey geopolitics are again becoming rather unsettling.

The row with Washington over Turkey’s decision to deploy Russian S-400 advanced missile defence systems that are a security threat to Nato military hardware is not resolved—though Trump’s present sympathies for the authoritarian Erdogan have stood in the way of sanctions Congress would like to see thrown at Ankara—but a more worrying matter right now is how the remnants of the Syrian conflict can be dealt with without any major clashes, for example, between Turkish armed forces and US-allied Kurdish militia, or between the advancing forces of Damascus and Vladimir Putin in Idlib and Erdogan’s jihadists. The Syrian regime appears to be showing more and more willingness to take pot shots at Turkish forces. Syria is still a mess even though pundits have been arguing for a few years now that the war has ended.

With Erdogan in peril if he doesn’t play his difficult hand well and Syria and the wider region in a fragile and volatile state, September will witness some notable action in Turkish and regional politics.