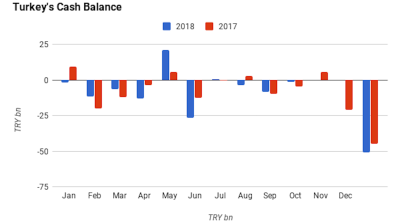 It cited reduced financing needs thanks to the government’s recent saving measures and €1bn worth of eurobond sales made on November 7.

The move could relax the recently tightened Turkish lira liquidity conditions to some extent.

“Bullish move. October fiscal numbers were surprisingly good, with the cash deficit down to TRY1.5bn, one fifth the year earlier level,” Timothy Ash of Bluebay Asset Management said in an e-mailed comment.

The treasury’s cash deficit contracted by 67% y/y to TRY1.47bn in October from TRY4.51bn a year ago after declining by 17% y/y to TRY8.18bn in September, the authority said on November 7.

Across January-October, the cash deficit grew by 13% y/y to TRY51bn.

The finance ministry will release the October budget figures on November 15.

The Treasury did not comment on whether it will hold a planned 2-year lease certificate (direct sale) auction on November 20.

Also, according to the previously announced domestic borrowing strategy, the authority plans to borrow a total of TRY22.4bn from the domestic market in November versus a debt redemption of TRY21.8bn. The heftiest debt redemption will be on November 14 at TRY19.5bn.

The Treasury expects total domestic borrowing this year will amount to TRYTRY132.4bn, down from the planned TRY134.3bn.

Turkey is planning to raise less cash through local-currency debt sales than it redeems for the first time since 2016, according to the Treasury’s 2019 borrowing strategy.

The Treasury, meanwhile, plans to borrow $8bn on international markets in 2019.