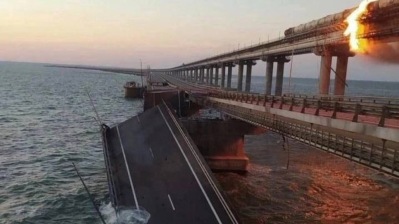 In what appears to be a suicide attack, a massive truck bomb destroyed part of the Kerch bridge that connects the Russian mainland to the Crimean peninsula on the morning of October 8. / bne IntelliNews
By bne IntelliNews October 8, 2022

A truck driving over the Kerch bridge that connects the Russian mainland to Crimea exploded in the early hours of October 8, destroying a section of the bridge and setting an adjacent fuel train on fire, in the latest setback for president Vladimir Putin’s war in Ukraine.

The attack appears to be a suicide bombing that happened at around 6 am local time. Security camera footage released on social media shows a truck driving over the bridge from the mainland towards Crimea exploding into a huge ball of flame. Other video and photos posted by people at the scene show an approximately 200m section of road collapsed into the sea and several tankers on the railway that runs parallel to the road on fire.

Speculation immediately started that the explosion was a Ukrainian special operation. The explosion comes only two weeks after a series of explosions destroyed three out of the four strands of the Nord Stream gas pipelines that run across the bottom of the Baltic Sea.

The Ukrainian special forces have also been credited with several explosions at military bases, oil refineries and key infrastructure across Russia in the eight months since the war began. Most recently, the New York Times reported last week that the car bombing in Moscow that killed Darya Dulgina, the daughter of an influential Russian political scientist, was a Ukrainian special operation.

The destruction of the bridge is another blow to Putin’s beleaguered Ukrainian military campaign and comes on the day after his 70th birthday. Built by a company owned by Putin’s close associates Gennady Timchenko and the Rotenberg brothers at a cost of some $4bn, Putin personally drove a truck across the bridge when it was opened. It allows Russia to supply the peninsula it annexed in 2014.

More recently, the bridge has been used by local residents on the peninsula to flee back to Russia after an army base was hit by massive explosions at the Black Sea fleet air base in August, the first time targets in Crimea were hit during the war. As bne IntelliNews reported, tourists vacationing on the peninsula’s beaches streamed across the bridge during subsequent days for fear of further attacks.

No concrete information on the Kerch explosion is available yet other than what has been posted online showing the extent of the damage.

The Russian authorities claim it was a Ukrainian “terrorist” attack. Vladimir Konstantinov, the head of Crimea's Russian-installed illegal "parliament", claimed that the damage was "insignificant", and the bridge would be repaired soon, blaming it on “Ukrainian hooligans.”

Professor Sergey Radchenko from the Kissinger Centre commented that the bridge is a “key component of Russia's war infrastructure” that has been used to transfer manpower, weapons and fuel into Ukraine throughout the war.

“"A key" doesn't mean that Russia can't do without [it], but it's [still] a significant loss. Second, the bridge is an escape route out of Crimea for its estimated 2mn residents. We can anticipate renewed desire to leave Crimea, potentially bordering on panic, now that this is shut off,” Radchenko said in a tweet.

The closing of the bridge is not a total disaster for the Kremlin, as it maintains the land bridge to Crimea that stretches from the Russian border at Rostov down to the peninsula, so supplies can easily be sent in and people can leave, but the blow against a prestige project will be the latest in a series of setbacks since the Ukrainian army launched its spectacularly successful counter-offensive last month. And coming on the back of the Nord Stream explosions it raises the question of whether Ukraine and her allies are now targeting key Russian infrastructure outside Ukraine.

“The real significance here is symbolic: Ukraine demonstrating capability, and Putin being seen rapidly running out of options. Given the developments of recent weeks – a shambolic mobilisation, defeats in Ukraine, criticism of [Russian Defence Minister Sergei] Shoigu – Putin will be put on the spot big time,” Radchenko added.

Putin was woken up early and has ordered the creation of a government commission “in connection with the emergency on the Crimean bridge,” his press secretary said, as cited by Meduza. Russian senator Alexander Bashkin told Russian journalists Moscow will have a “possibly asymmetrical response.” Duma deputy Oleg Morozov, meanwhile, said the “terrorist attack” on the bridge is tantamount to a “declaration of war without rules”, Meduza reports.

A Ukrainian presidential aide in Kyiv responded by saying: “everything illegal must be destroyed.”

Ukrainian authorities have repeatedly said that the bridge could be hit. In August, Mykhailo Podolyak, a senior Ukrainian presidential aide, said that Ukrainian authorities consider the bridge a legitimate military target, since it is the main supply route for the Russian army on the Crimean Peninsula. Dmitry Marchenko, a major-general of the UAF, said that the bridge was “target number one for destruction for the Ukrainian military as soon as they got the technical ability to strike it,” reports Meduza.

Open to passenger vehicles since May 2018, the Crimea Bridge is one of Moscow’s biggest infrastructure investments in the occupied peninsula.