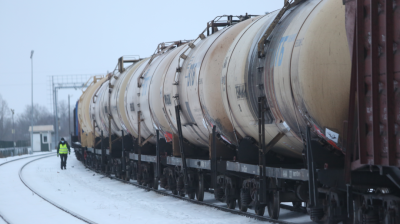 A worker inspects the cargo from Belarus at the Indra border-crossing point in Latvia. / Picture from: en.rebaltica.lv
By bne IntelliNews February 9, 2022

On February 4, Estonia announced that it would introduce additional sanctions on Belarus in the form of suspending the transit of coal-based oil by customs code 2707. This meant that Belarus' trade war with Lithuania has suddenly got a lot bigger.

On January 30, Re:Baltica, Delfi Estonia and the Belarusian Investigative Centre  published an investigative article which showed a three-fold increase in oil exports from Belarus to Estonia when comparing numbers for 2021 and 2020. The report showed a number of suspicious trade connections between Russian, Belarusian and Estonian business owners whom the article suspects of being involved in a scheme to bypass sanctions.

Last year’s EU sanctions included the oil products defined by the customs code 2710. What’s been happening since is that exports from Belarus to Estonia of oil products under the code 2707 have increased sharply. This raises suspicions as to whether a transport scheme has been successfully tricking the Estonian authorities with a code switch.

The next day, the Estonian Prime Minister Kaja Kallas asked for a clarification on whether or not there had been a deliberate violation of the sanctions against Belarus. In the end, Estonia chose to implement its own sanctions against the product code 2707; according to Estonian’s prime minister this was done “given the function of sanctions, Estonia's role in pushing for them, and the country's values-based foreign policy.”

Just a couple of days earlier, Belarus’ strongman Alexander Lukashenko lashed out hard against Lithuania for its sanctions against Belarusian fertiliser exports, and even called it a modern day inquisition. Lukashenko promised a harsh response, and a few days after, Belarus suspended the transit of oil and chemical products from Lithuania.

This was probably Minsk’s toughest move available, however, it can be expected to have only meagre effects. According to UN Comtrade, Lithuania’s fertiliser exports in 2020 only amounted to about $1.5mn and its oil exports to about $16.3mn. This can be compared to Belarus’ exports to Lithuania, which amounted to nearly $93.2mn and $140mn for the respective products in the same year.

Belarus’ is desperately trying to get back at Western countries for their sanctions, but the attempts don’t seem to be holding up. Belarus’ ban on certain western food products which came into force in January has recently had to be removed. Most likely, due to the continuing increase in food price inflation in Belarus, the Ministry for Antimonopoly Regulation and Trade realised that all the price regulations in the world couldn’t help them ease inflation as much as the ending of the ban.

Belarus is a small economy, and most of all, a trade dependent economy. It won't be clear for another year how oil exports through Estonia change. What’s certain is that Belarus’ responses to the Baltic countries’ trade restrictions will be loud, but the impacts will probably be modest.