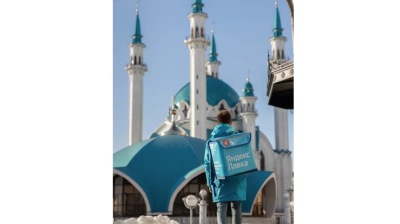 E-commerce is booming but to get the goods to the punters the leading firms have employed an army of couriers and pay them better than average wages
By bne IntelliNews May 23, 2021

E-commerce is booming in Russia, but it relies on an army of couriers that are now earning up to twice the average salaries in Russia’s far flung regions, RBC reported citing a recent study.

And the income, and its comparison to local incomes, varies greatly throughout the country; however, couriers earn more than the regional average everywhere in Russia except in Moscow, and in some cases twice as much, according to survey by the Center for Strategic Research.

The numbers are slightly skewed by the fact that many couriers elect to work part time, whereas some work 45 hours a week or more.

As usual, Moscow is the exception to the rule, where the average earnings of a courier are RUB55,600 per month against the city’s average income of RUB87,100.

In other regions the difference in income between the courier and local average can be extreme. In southern region of Saratov, a courier's salary is RUB79,800 versus the regional average of RUB29,200. In Kazan, the capital of semi-autonomous Tatarstan, couriers get RUB85,400, while the average wage is RUB34,600. In Rostov-on-Don, the ratio in favour of couriers was RUB70,800 vs 31,000.

Earnings of couriers and average for the region in some cities of Russia, thousand rubles:

The main employers of couriers are Yandex.Eda, Delivery Club, SberMarket and CDEK.

Two thirds (65%) of the respondents said that working as a courier is the main source of income. About 20% work elsewhere, but of those half said that money from courier activities makes up a significant share of their income. 14% of couriers said that income from the job is less than 50% of total earnings.

The most popular mode of transport among couriers turned out to be a car, 28% of them use a bicycle, another 25% use public transport, and every seventh courier does not use any of these modes of transport.