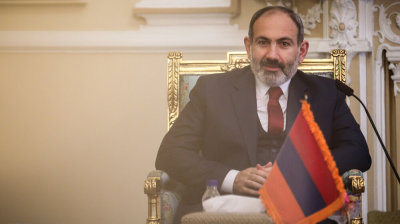 Pashinian wants the blockade of roads leading to the Amulsar mine to end.
By bne IntelliNews September 20, 2019

He particularly took aim against environmentalists campaigning against the Amulsar gold mining project, claiming they were misleading the public.

The mining industry accounted for more than 40% of Armenian exports and would be the country’s sole reliable source of hard currency in the event of a renewed war with Azerbaijan, Pashinian pointed out.

“Therefore, demonizing mining means dealing a blow to our national security,” he declared at a four-hour news conference held in the northern city of Vanadzor, as reported by RFE/RL.

“Let’s leave mining alone… There is hardly a civilised country in the world where there is no mining industry,” he reportedly added.

There is a continuing crisis over the Amulsar project, disrupted by protesters since June 2018. Pashinian has again insisted that his government cannot break any laws to prevent a British-American company, Lydian International, from mining gold at a massive deposit in the southeastern Vayots Dzor province.

“On this issue we must pursue the truth till the end and the truth itself must lead us to one or another decision [on Amulsar,]” he said. “And in terms of the truth, I find it very important that the public does not succumb to manipulations, including by my beloved and respected friends.”

The prime minister ridiculed some environmental protesters’ latest claim, namely that mining at the Amulsar deposit would lead to not only toxic but also radioactive pollution. A recent government inspection disproved environmentalists’ allegations about a serious risk of the collapse of a mining waste disposal facility in the northern Lori province, he added. That facility is part of the Teghut copper mine employing around 900 people. Extraction and ore processing operations there were halted in early 2018. The mine’s new, Russian owner restarted them recently.

Pashinian added that if protesters did not end their more than year-long blockade of all roads leading to Amulsar, Armenia’s international business reputation would be ruined and the country would be turned into a “black hole on the world’s economic map”.

Pashinian met with Lydian’s top executives earlier this month. After the meeting, he said he received fresh assurances that “not a single litre of toxic water” would be leaked during gold production at Amulsar.

Pashinian has also stated that Lydian’s project is much safer and more environmentally friendly than long-running mining operations carried out in Armenia by other companies. Forbidding the Amulsar operation would mean the government having to close all other metal mines and destroy thousands of jobs, he said.