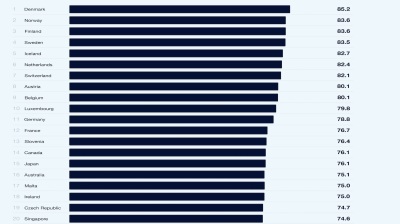 Slovenia ranks first in Central, Eastern and Southeast Europe and is placed in 13th position globally according to the first Social Mobility Report published by the World Economic Forum (WEF) on January 21.

The Global Social Mobility Index 2020 was released during the WEF annual meeting at Davos. Releasing the study, the WEF talked of the lost economic growth opportunities associated with poor social mobility.

“The headline finding of the report is that most economies are failing to provide the conditions in which their citizens can thrive, often by a large margin. As a result, an individual’s opportunities in life remain tethered to their socio-economic status at birth, entrenching historical inequalities,” said the WEF in a statement.

“This is a major problem not only for the individual, but also society and the economy. Human capital is the driving force of economic growth. As a result, anything that undermines the best allocation of talent and impedes the accumulation of human capital may significantly hamper growth. Poor social mobility coupled with inequality of opportunity underpin these frictions, suggesting that if the level of social mobility were increased, it could act as a lever to economic growth.”

According to the index, which ranks 82 countries worldwide, Slovenia had 76.4 points on average. The countries above it on the index were exclusively western and northern European countries.

The first on the list is Denmark, followed by Norway and Finland.

The only other country from emerging Europe to make it into the top 20 states was the Czech Republic, at 19th place with a score of 74.8.

A number of others from the region are clustered around the middle of the ranking, most performing less well than their peers from western Europe, but outperforming emerging economies from Latin America, Africa and South Asia.

Among the Central European economies, Estonia is at 23rd place, Lithuania 25th (just above the US) and Poland 30th.

Kazakhstan is in 38th place, and Russia 39th.

Among the Southeast European countries, Croatia was the second ranked after Slovenia, at 36th place with 66.7 points. Bulgaria, Serbia and Romania ranked 40th, 41st and 42nd respectively. Moldova occupied 49th position while Albania has been placed on bottom among countries in the region at 54th.

The WEF report identifies a trend towards deepening inequalities since the onset of the Fourth Industrial Revolution. The report refers to “huge wage disparities”, which have “grown exponentially” since the 1970s, which have often been blamed on globalisation and technology.

“The index clearly shows that the former has increased inequalities within countries by transferring low-skilled jobs in high-productivity sectors in high-income economies to lower-income counterparts. This has effectively penalised workers in specific locations and types of job,” says the report.

“The Fourth Industrial Revolution, and with it, continuing and future disruption to labour markets, will likely compound differences in social mobility for those countries unprepared to take advantage of new opportunities,” it adds.