Slovakia´s unemployment rate at its new minimum in March, the lowest number since 1993 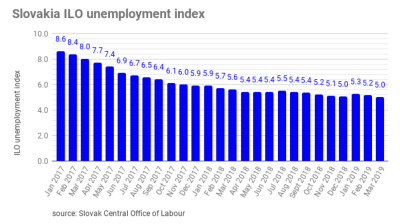 Slovakia´s registered unemployment rate amounted to 5.03% in March, from 5.16% in February, down by 0.13 percentage points (pp) month-to-month and by 0.52pp year-on-year, according to data published by the Labour, Social Affairs and the Family Centre on April 23.

The monthly rate decrease of registered unemployment was recorded in all regions, with Presov region posting the most significant fall. The unemployment rate dropped below 4% in 36 districts, according to the Labour Minister Jan Richter (Smer-SD). Most jobs were offered in Bratislava region, the least in Banska Bystrica. By the end of March there were 88,093 available jobs, up by 1,961 open positions m/m.

According to the minister, the development of March unemployment rate returned to “positive numbers”. He stressed he expects the rate to decrease below 5% in April.